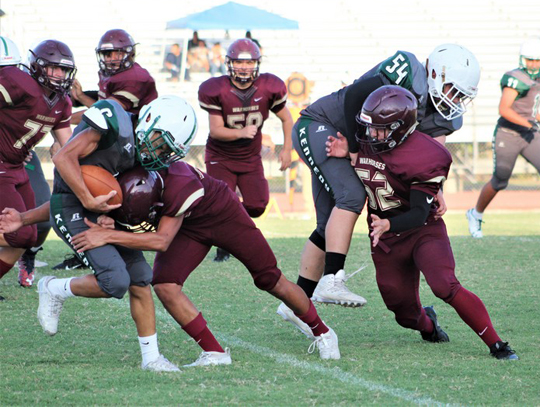 The JV Warhorses set a dominating tone early in the early stages of its 44-0 dismantling of the visiting San Antonio Kennedy Rockets last Thursday at Warhorse Stadium. Devine sprinted out to a 30-0 halftime lead and was never threatened in the ballgame.
On the Horses first drive of the game, quarterback Cody Trammel pitched the ball to halfback Hayden DuBose who took it all the way to the end zone for a 66-yard touchdown. Trammal kept the ball on the 2-pt conversion to put Devine up 8-0.
Devine’s kickoff squirted just past the Rocket’s frontline and the Horses jumped on the loose ball to regain possession. Fullback Gus Puente scored from 1-yard out and ran in the 2-pt conversion to bump the lead to 16-0.
The Warhorse defense forced a three-and-out on the Rocket’s first offensive possession and quickly turned that into score number three of the first quarter. Allan Perez found the end zone from 8-yards out, increasing Devine’s lead to 22-0.
The onslaught did not stop there. DuBose scored his second touchdown of the half on a 26-yard run, and Sage Cruz ran in the 2-pt conversion to put the Horses up by thirty points.
Gus Puente’s 17-yard run and Outlaw Walker’s 5-yarder came early in the third quarter. Walker also converted the 2-pt attempt after Puente’s touchdown.
Just as the varsity did a night later, the JV pitched a shutout in their first game of the season. Defensive play-caller Coach Scott Taylor heaped praise on several players.
“Evan Rico’s forced fumble that was recovered by Kannon Ramirez set up our third touchdown. The linebacker group of Rico, Robert Ramirez, and Hayden Brummage had several tackles throughout the game.”
In a game with several touchdowns, special teams comes into play often. Taylor happens to coach those groups as well. He stated, “Our special teams got the ball back three times. Once was on a blocked punt by Robert Ramirez, and two other times on pooched kickoffs. Our extra point kicker Ryan Castro performed well as well.”
Devine pretty much ran out the clock from there to open the season with a convincing victory.
Up next
Devine travels to Somerset to take on the Bulldogs on Thursday, September 5th. Kickoff is set for 6:45pm.
By Jerel Beaty
Staff Writer