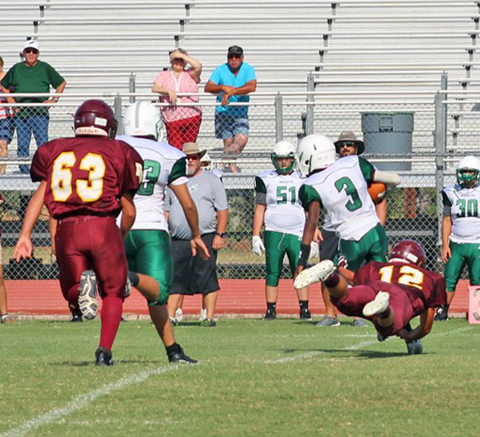 The freshman Horses opened their 2019 season with a convincing 24-6 win over the San Antonio Kennedy Rockets. Devine’s Marcus Rodriguez, Blain Davis, and Jaiden Burford all reached the end zone in the 12-point victory.
Offensive play caller Bart Oropeza, “I felt that our freshman made a good appearance against the Kennedy Rockets. We started strong on offense by marching down the field and scoring on our first offensive possession.”
Marcus Rodriquez had a 25-yard touchdown to put Devine on the scoreboard first. Jaiden Burford punched in the 2-point conversion to make it 8-0 right off the bat. The Horses second touchdown of the evening came by way of a 6-yard rush from halfback Blain Davis. The 2-point conversion failed but Devine was up 14-0.
Quarterback Jaiden Burford delivered the final touchdown for the night with his 60-yard option keep play. Another offensive highlight was Burford’s 45-yard completion to receiver Camden White.
“It was good to muster up a victory in our first game of the season,” Oropeza continued. “But, there are many areas of the game that we have to improve in early in the season.”
Defensively, only giving up 6-points usually puts teams in position to win more games than not. Coach Juan Gonzales was more than happy with his unit’s effort.
“We played a great game. By limiting their offensive possessions, it gave us an opportunity to score and to play all of our back up players. It’s important to get all of our guys game reps.”
Standing out for Coach Gonzales were rovers Marcus Rodriguez and Enrique Midobuche while Nick Ortiz and Aaron Saenz stood out at linebacker.
Gonzales finished saying “it was a great start to our 2019 season. We will be ready to get back to work and to get after Somerset Thursday.”
Up next
The freshman take on the Bulldogs in Somerset on Thursday, September 5. Kickoff is set for 5:00pm.
By Jerel Beaty
Staff Writer