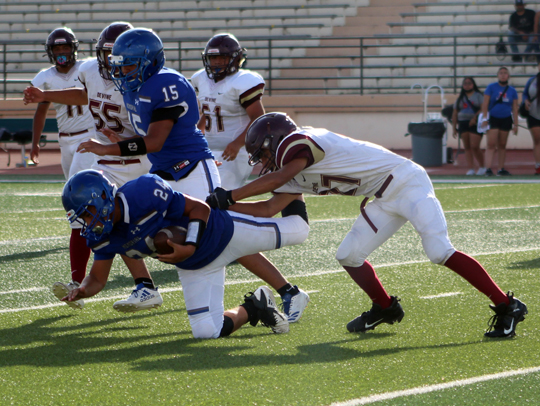 “I hate bye weeks!!!” were the first words out of Coach Heath Poppe’s mouth as he recapped the Warhorse JV football victory over Carrizo Springs. After a sluggish start, according to Poppe, Devine found their groove in time to gut out the 28-14 win at Warhorse Stadium.
“We were on a good roll through the first five games of the season, but after the week off, out momentum and our rhythm was thrown off to start the game,” Poppe stated. “We came out flat offensively. We didn’t mash up front like we had done before.”
Although the team may not have “mashed” early, Devine running back Eli Contreras scored the game’s first touchdown at the 4:38 mark of the first quarter. He added the two-point conversion to give his team an 8-0 lead.
The Wildcats pawed back with their own two-yard run but failed to score the conversion with 2:02 to go in the first quarter, pulling the score closer at 8-6.
The Horses managed to put together a scoring drive with two-seconds left in the half as Jonathon Weinkam burst through for a three-yard on a quarterback sneak to boost the lead to 14-6 at the break.
“They were using multiple defensive fronts and for some reason we were confusing our blocking schemes early,” Poppe said about his team’s first 20-minute struggle. “Carrizo came out with a chip on their shoulder, and hit us in the mouth early. We were able to talk to the players and figure out what we needed to do at halftime, and our players responded well.”
Devine’s defense rose to the occasion in the third quarter as they crushed the Wildcat running game on a 4th and four to go at the Warhorse 27-yard line.
Then began mashing up front as the offensive line provided vital blocking as Evan Sanchez went 36-yards to increase the lead to 20-6.
Carrizo did not surrender easily as they answered the bell with a 12-yard touchdown run with 9:32 to go in the fourth quarter. The Wildcats converted the two-pointer to sneak within 20-14
Contreras scored the game-clinching touchdown with 6:24 to go on a 27-yard run. Evan Sanchez ran in for two to provide the 28-14 final score.
“I give Carrizo Springs a lot of credit as they were the most excited team to play early in the ballgame,” Poppe stated. “Our team responded and got the victory and that is the most important thing.”
Defensive coordinator Evan Eads was pleased with how his troops stopped a potentially potent Carrizo Springs offensive saying, “I am very proud of how well our defense played. We have kids playing hurt, but they continue to make plays. Our defensive tackles and defensive ends were integral in making stops.”
The JV is now 6-0 on the season, 1-0 in district with an upcoming game against Hondo next Thursday.
By Jerel Beaty
Staff Writer