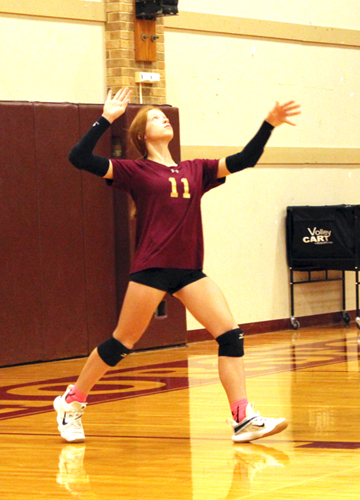 The Freshman Arabians had a great week against Feast and Fox Tech last week. They are now 8-4 after winning both games and have finished the first half of district. Last night they played Somerset at home and are off this Friday. Next Tuesday they will play at home against Young Women’s Leadership Academy on October 19th and then at Brooks on Friday, October 22nd.
Tuesday in a non-district game, the Arabians took Feast down in two sets. Winning 25-12 and 25-15, the Freshman team started and finished strong. In their district game on Friday, the Arabians were ready for Fox Tech and dominated the first game 25-6 and the second set 25-16.
“The girls have really impressed me the past couple of weeks. They have made a lot of progress and have started to put all of the pieces together. This has led us to an undefeated first round of district play. I’m excited to see what the girls do in the second round as we near the end of the season,” said Coach Kara Stacy.
Charlee Rangel 2 digs, 3 aces, 1 kill. Oakley Malone 5 digs, assists, 2 aces. Lynn Lawler 1 dig. Katie Rios 5 digs, 1 ace. Yaya Rodriguez 1 dig, 3 kills. Abby Saunders 2 aces. Brooke Thompson 3 kills. Kenzie Savage 1 dig, 2 kills. Kourtni Geyer 3 digs, 1 ace. Hannah Brumage 1 dig, 3 kills. Savannah Parker 1 dig, 4 kills. Maddie Brown 2 digs.
Rangel 2 digs, 2 aces. Malone 2 digs, 7 assists, 7 aces. Rios 5 digs. Rodriguez 2 kills. Saunders 2 digs. Savage 1 kill. Geyer 1 dig, 4 aces. Brumage 1 ace, 2 kills. Parker 1 kill. Brown 1 dig, 1 kill.
By Dicy Chambers
Sports Writer