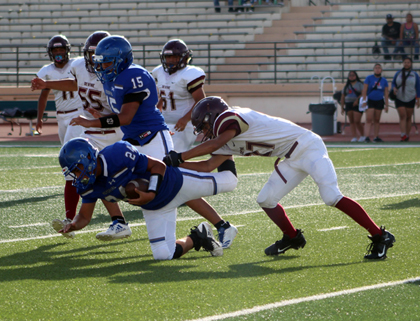 The Devine offensive line consisting of Wyatt Lafond, Seth Deleon, Charles Key, Michael Girtz, Richard Hernandez, Adam Guerrero, Jonathan Hyzer and Zach Martinez mashed the San Antonio Minutemen defensive line the entire ballgame according to JV Offensive Coordinator Heath Poppe. “Our backs had huge holes to run through,” said Poppe. “The holes were so big I think even my old self could have scored with those guys amazing blocking.”
Uh, let’s not get too crazy there, Pop.
Devine spanked Memorial 50-6 in San Antonio last Thursday to open their season with two consecutive victories. The Horses next take on YMLA, also in San Antonio.
“Two players that stood out as well were fullback Jose Moralez and tight end Samuel Mills,” Poppe continued. “Jose did an excellent job getting his kick out block on our bread and butter play which is ‘power’ to either side of the field. Sam, who is really a split end and weighs probably 130-pounds soaking wet, had to step in to play tight end and he did an amazing job blocking his tail off. Sam was going up against a guy probably 220-pounds, but moved him all night long.”
Much like the varsity Warhorses who are not only pummeling opposing defenses physically but keeping them on their heels as well by utilizing several different ball carriers throughout the game, the JV has its own set of talented backfield rushers.
“The five-headed snake of Evan Sanchez, Wero Torres, Eli Contreras, Jose Moralez, and Jonathon Weinkam did a great job of getting up into the running lane and turning on the jets tonight,” Poppe said of his talented and explosive running backs. “I see great things for these players as they continue to improve weekly.”
Scoring Summary
Devine took their opening drive 55-yards, capping it off with an Evan Sanchez 17-yard run with six minutes on the clock. Wero Torres ran the two-pointer to give the Horses an early 8-0 lead.
Memorial scored on their opening drive as well as their quarterback took it 37-yards to close the gap to 8-6 in favor of the Horses. The Minutemen never got closer than that two-point deficit as Torres scored for Devine with 8:52 to go in the second quarter to boost the Warhorse lead to 14-6.
Devine’s defense forced a three-and-out and the Warhorse offense followed with a 63-yard drive that ended with an Eli Contreras 3-yard run. Sanchez hooked the Horses up with a two-point run to put Devine up 22-6 with 6:13 left in the first half.
The Horses recovered the ensuing onside kick at their own 46 to maintain possession of the ball. Torres took the first snap after the recovery 54-yards in 13-seconds, while Jose Moralez punched in the conversion run, bumping Devine to a 30-6 lead at the intermission.
Devine continued their onslaught after halftime as quarterback Jonathon Weinkam snuck in from the one-yard line with 7:45 on the clock. Sanchez tacked on the two-pointer to put Devine ahead comfortably 38-6.
Three-and-outs became the common theme for Devine’s ‘D’ as Torres put together a nice return off a Memorial punt. Contreras sprinted 37-yards on the first play after Torres’ return to put up the Horses 44th point of the game.
Poppe was simply trying to give his offensive squad some breathing room after the Minutemen punted the ball to the Warhorse one-yard line by sneaking Weinkam once again. However, Weinkam broke free for a Tony Dorsett-type 99-yard run that put the half-hundred mark on the scoreboard and closed out the scoring for both teams on the night.
On the sneak, Memorial did not have a nose guard so by the time a second and a half passed, Weinkam was well ahead of all Minutemen on his way to the end zone.
Up next
Devine travels to San Antonio once again, this time to take on YMLA at 4:30pm. The address provided is 415 Gabriel Street with a 78202 zip code.
By Jerel Beaty
Staff Writer