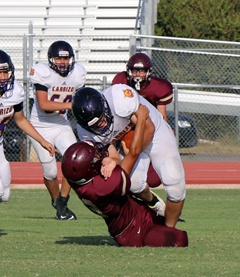 With San Antonio Memorial not having enough players to field a freshman football team, the Devine freshmen hosted Carrizo Springs last Thursday at Warhorse Stadium. The Horses ran rough shod over the Wildcats with a 30-8 blowout victory.
Devine freshman Offensive Coordinator Juan Gonzalez stated, “The boys played a great game last Thursday night. They were ready to go from the start of the game. We had to move some players around, but were up for the challenge.”
Devine took an early first quarter lead on a Tony Saldivar 3-yard run that put the Horses up 6-0 as the two-point attempt was not successful.
Edward Perez got in a good 80-yard sprint, taking it to the house and bumping Devine’s lead to 12-0 in the second quarter.
Matthew Gomez intercepted a Wildcat pass attempt and returned it 25-yards for Devine’s third touchdown of the first half. Perez rushed for the two-point conversion giving the Horses a comfortable 20-0 lead at the break.
Gomez tacked on a fourth quarter 8-yard run, while Alfredo Ramirez bounced in for the two-point try. Devine led 28-0.
Gomez left his mark on the defensive side of the ball as well, tackling a Carrizo ball carrier in their own end zone for a safety. That safety closed scoring for both teams and secured their 30-8 victory.
“I am very proud of our group of young men stepping it up again this week,” Gonzalez said in closing. “We had to move some running backs and a few linemen up to JV and had to move some kids around to new positions, but we have not skipped a beat. Our kids are stepping up and filling in at unfamiliar spots. They are doing a great job all around!”
After shutting out San Antonio Highlands and allowing only two first downs that entire ballgame, an opponent cracked that goose egg off the game field scoreboard. Carrizo Springs notched a first quarter score, but Devine’s defense was spot on from there on out.
The Horses have shut their competition down with all-around great team effort.
Freshman Defensive Coordinator Bart Oropeza likes what he sees so far on that side of the ball, and continues to push his players to make positive progress as the season rolls along.
“I am excited about our freshmen defense,” Oropeza said. “We really flew around and gang-tackled our opponent. We scored eight defensive points with Matthew’s pick-six interception and his safety later in the game. These boys are hard workers and have a great attitude. We will continue to work hard to improve.”
Up next
Devine is now 2-0 on the season and play at Medina Valley this Thursday at 5:00pm.
By Jerel Beaty
Staff Writer