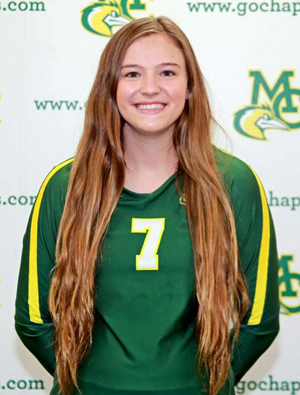 Chesney Friesenhahn remembers what it was like as a wide-eyed freshman last year on the Midland College volleyball team.
The outside hitter from Devine, which is located just southwest of San Antonio, admitted she arrived on campus three weeks before the 2018 season kind of blind and not knowing what to expect.
“Getting thrown into the volleyball fire, it was a lot to take in,” she said. “But coming in this year, knowing what to expect has helped me a lot. Knowing how (head coach Tammie Jimenez) is as a coach, I understand the things she’s saying now and we can relay those messages to the freshmen and explain what she means.”
Friesenhahn is one of six sophomores on this year’s team that will be counted on to lead eight freshmen into the season, which starts today with MC hosting the annual Kickoff Volleyball Classic at Chaparral Center.
“I need to be a leader,” she said. “I have a role on this team and I want to help out in whatever way I can help out.
“I want to lead by encouragement as well as holding my teammates accountable. I want to hold them accountable and I want them to do the same for me. I’m really vocal, so I think I contribute that way on the court as well, trying to just talk in between plays, during plays and things like that.”
Jimenez said Friesenhahn is the kind of player who doesn’t let things, good or bad, get to her head. She added that Friesenhahn also put in a lot of work over the summer to improve and be that player that the other Lady Chaparrals can count on.
“She prepared, she got herself into shape, she did a great job of working in the offseason on things that needed to be fixed on her game,” Jimenez said. “She’s shown up in preseason ready to work, ready to lead and she’s motivated, so we’re excited about her. She’s really a strong blocker for us, so we’re looking to take advantage of that prospect of her game. She’s a kid that terminates the ball well. I think she’s going to see a lot of points both offensively and defensively. She’s being more aggressive and more consistent. I think she’s started to come into her own and understanding how good she can be.”
Friesenhahn said she feels both mentally and physically stronger than she did a year ago. She added that being more confident should not only help her game but help her become a better leader as well.
“I think my role is to be vocal on the court, be that person that others aren’t afraid to go to, not afraid to get the ball to,” she said. “I want other people to be confident in me as well as me (to be) confident in them too.”
Friesenhahn almost didn’t even get a chance to get to play college volleyball. She said she was ready to go to Texas Tech as a regular student and had gotten a dorm room when her club volleyball coach told her that Jimenez was interested in her coming to MC. After a visit to MC, Friesenhahn decided to become a Lady Chap.
“I knew I wanted to play and I couldn’t imagine myself not playing if I had the opportunity,” she said.
Friesenhahn grew up mostly playing softball, but after she got into volleyball in the seventh grade, she soon realized that was the sport for her.
“I realized that I really liked this and I could be good at this,” she said. “I think the camaraderie of the sport and the team (concept) is what I love. I love being on a team and I think coming together in the middle of the court, you score a point with all the yelling and excitement. I think that’s what makes me most excited about the sport. That’s a feeling you can’t explain.”
Friesenhahn hopes to make more memories with her Lady Chap teammates this season.
“Last year we lost in the (Region V West Tournament) championship after dropping the fifth set to (New Mexico Military Institute). I think we’re capable to taking that next step,” she said. “Knowing that we did so well at the regional tournament, it made me that more excited to get on the floor with these girls, especially our sophomores because we have a lot of potential.”
LADY CHAPS AT A GLANCE
Coach: Tammie Jimenez, 9th year, (153-96)
Last year’s record: 20-11 overall, 6-4 in WJCAC (third)
Top returners: OH Hayden Smyers, S/RSH Lina Espejo Ramirez, OH/RSH Chesney Friesenhahn, OH Lauren Watanabe
Key players lost: S Desiree Marmolejo, OH Aleksandra Rodric
Top newcomers: S/DS Modesti Vargas, MB Logan Terrazas, MB Kirsten Gomez
Coach’s quote: “We have six sophomores back from last year who have grown quite a bit in their maturity level and understanding of the game. They’ve been quite impactful in preseason. Our eight freshmen are climbing an uphill battle in terms of a learning curve. The game is much faster than what they’re accustomed to. The level of play is bigger than what they’re accustomed to, so there’s going to be this growth period that has to happen. That’s our biggest challenge.”
Notes: Jimenez said playing good defense, like always, will be key for her team. “Right now because we’re not an overly dominant offensive team, we have to rely quite a bit on our defense to kind of fuel our points,” Jimenez said. “You can’t win without offense, so those are areas we have to get better at.”
Courtesy of Oscar LeRoy,
MRT.com
Midland Reporter-Telegram
Published 8:23 pm CDT, Thursday, August 22, 2019