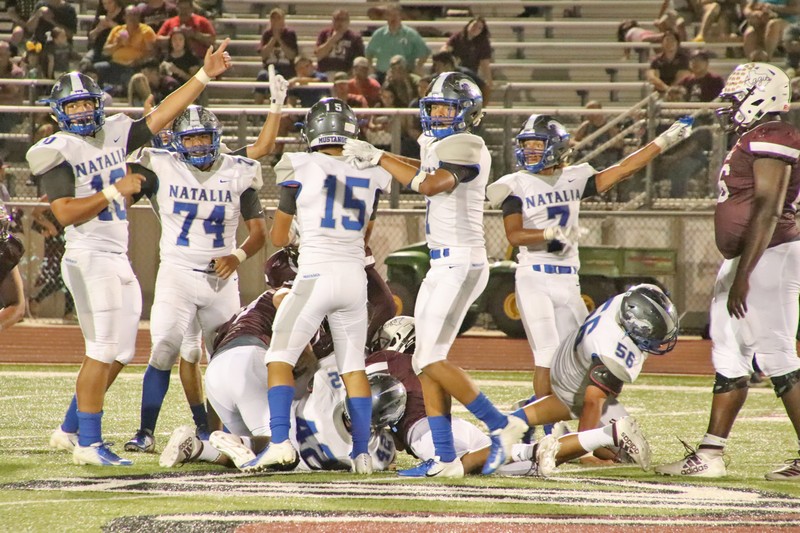 The Natalia Mustangs (4-1) will welcome the Stockdale Brahmas (1-4) to town this coming Friday for Natalia Homecoming 2019. A large number of Natalia exes are expected this year at the game, as a result of the resurrection of the community wide homecoming Alumni Reunion which is set for Saturday at the Natalia JH Cafeteria. Natalia Head Coach Ilyan Martinez and the Mustangs are hoping fans will come early, be loud, wear blue and cheer on the Stangs as they open District 15-3A (Div.II) in style vs the Brahmas.
Stockdale Outlook
Do not be fooled when you look at the record of the Purple Pride Brahmas from Wilson County, as Stockdale is better than they appear. They have been hit with injuries this season including their QB Alonzo Marquez who has been missing the last few weeks.
“Their QB is their key to their offense,” Coach Martinez said. “He runs the ball well and gave us problems a year ago. He has been injured the last two games, but I expect him back at full strength this coming week and we will have to find a way to corral him and not allow him to beat us with his feet.”
The Brahmas are 1-4 as mentioned as they lost games to: Schulenburg 14-13, Karnes City 34-7, #1 Falls City 20-7, and Yorktown 21-7 before defeating Louise two weeks ago 21-0.
“Stockdale is a big physical football team,” Martinez said. “They want to control the pace of the game and grind it out. They run the triple option offensively and are a 50-defense. Their mentality is don’t give up the big play on defense and keep away on offense. We will need to be very efficient with our possessions to try and find a way to put them behind so they don’t dictate the pace of the game.”
According to Martinez, the defensive lineman senior Payton Lerma who wears #11 is their leader.
“He is a big physical kid that we will have to do a great job of blocking and giving him different looks to wear him down,” Martinez said. “He does a great job of getting off the ball and establishing the line of scrimmage.”
The Brahmas are led by Coach Andrew King who is back at the helm of the Brahmas after coaching as a coordinator at Poth the last seven years. King led the Brahmas previously from 2004-2007.
The Brahmas return eight offensive starters and five defensive from their 4-7 squad that fell in the Bi-District playoffs after finishing 3-2 in district. This season, most have the Brahmas picked to finish in 4th place behind Poth, Natalia and Skidmore-Tynan and ahead of Dilley and Nixon-Smiley.
Natalia Outlook
The Natalia Mustangs are riding their second best record in 5+ seasons coming off a bye week.
“I am really happy with how our open week went,” Martinez said. “We wanted to get back to the fundamentals and really focus on the details of our play. We had a big emphasis on starting fast. We did some different things to really set the tone of practice with hopes it will help us start fast on Friday. We know we have to do a better job of starting games if we are going to have any success in district.”
Slow starts have hurt Natalia, but not kept them down. In their season opener Natalia was held scoreless and trailed 3-0 after the 1st quarter before going on to win the game 21-9. In their second game vs. Randolph, Natalia got down 14-0 before rallying back to win this game 27-21. Natalia was also scoreless in the opening quarter. Versus rival Lytle, Natalia trailed 3-0 for a short period of time, before coming back to dominate the Pirates 63-10. Against Jourdanton, Natalia was held scoreless in the 1st and held to a single TD in the 2nd quarter before suffering a lop-sided loss. Last but not least, in their final non-district battle, Natalia was held scoreless in the 1st and got down 21-0 before coming back to win a wild one 48-41.
“We need to come out and start fast and we can’t afford to waste any possessions,” Martinez said. “Defensively, we have to be disciplined and make more tackles. Our kids and coaches understand what is at stake and they have been waiting on another shot at Stockdale from a season ago.”
A season ago, Natalia suffered a sloppy 17-14 loss to the Brahmas in which Natalia scored all 14 points in the 4th quarter. Natalia won the statistical battle 339 yards to 20-4, but simply was not crisp offensively and disciplined defensively. This loss realistically knocked Natalia out of the playoffs.
“We will be the most physical and prepared team on Friday night,” Martinez exclaimed. “We will have to be, if we want to beat a good Stockdale team. They are well coached and have a great deal of tradition and we expect to get their very best.”
Kickoff is set
Pre-game ceremonies will take place Friday at 6:30 p.m. and club representatives will be recognized. The Mustangs and Brahmas will kick-off this coming Friday at 7:30 p.m. The 2019 Homecoming Court ceremonies will take place during the halftime of the football game.
The Natalia Mustang Band will perform following the football game due to homecoming festivities.
Be sure to come out early, visit with old classmates and cheer on the Mustangs!
By Eric Smith
Staff Writer