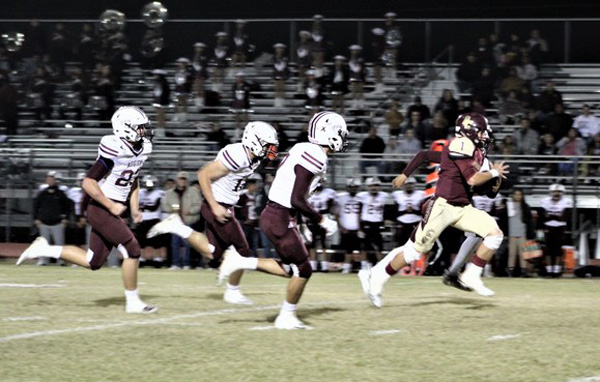 Game ball #1
Zero points is what the Warhorse defensive unit gave up against a Poteet team that boasted two thousand-yard rushers coming into Friday night’s contest. Yes, Poteet cracked the 100-yard mark with 122 yards rushing but 77 of those came on one busted defensive snap by the Horses.
Doing a little math here and eliminating Poteet’s one big play, Devine’s defense limited the Aggies to 45 yards on 26 carries which averages out to a measly 1.73 yards per carry.
Game ball #1 goes to each player that played a defensive snap and to the defensive coaches for shutting out the Aggies. Who are those players? Funny you should ask…
By numerical order, Brady Hackebeil, Joseph Hernandez, Buddy Santos, Xavier Contreras, Hunter Maxwell, Blaine Miller, Xsavior Martinez, Christian Gerlach, Mason Burford, Devin Ornelas, Peyton Carr, Leonard Pompa, Ryan Applewhite, Tristin Kannard, Jayce Hackebeil, Darrin Lafferty, DJ Dzierzanowski, and Christian Robles combined on the shutout along with defensive coaches George Villa, Heath Poppe, Devin Rotramel, PJ Wells, and Evan Eads.
These guys not only get the game ball for getting the shutout but they get extra icing on the cake for holding the Aggies to negative one-yard passing. How does that even happen…
Game ball #2 & #3
Justin Contreras continues to rush for an insane amount of yards on a minimal amount of carries. Justin ran for 161 yards on only 12 attempts, scored twice, and did not turn the ball over. His 13.4 yards per carry gives the Warhorse offense a chance to spread the ball around to other backs and to take some shots down field in the passing game from time to time.
Game ball #4 and #5
Xavier Contreras and Xsavior Martinez earn these two game balls for having the biggest influence on one singular play in keeping the shutout alive. Poteet’s running back busted loose for a long gain in the third quarter, looking as though he was going to get into the end zone rather easily.
As the back took the ball on his own 13-yard line and sprinted virtually untouched for the first 70+ yards of the run, Xavier chased the Aggie down at the Devine 10-yard line to prevent the score with Xsavior right on his heels.
On the play, Xavier was temporarily held by an Aggie receiver but once free, made up a yuuuge gap to make the solo tackle. Xsavior, who was in coverage on the opposite side of the football field, never gave up on the play either and would have been there to prevent the score had Xavier not been able to complete the tackle.
Our game ball #1 recipients (the entire defense) stopped Poteet on four straight tries after Poteet had broken free for that first and goal opportunity.
Team stats
First downs Dev 12 Pot 5 Total yards Dev 385 Pot 121 Rushes-yards-avg Dev 41-354-8.6 Pot 27-122-4.52 Passing yards Dev 31 Pot -1 Fumbles-lost Dev 1-1 Pot 0-0 Penalties-yards Dev 6-70 Pot 6-30
Individual stats
Rushing Justin Contreras 12-161 (413.4), 2 TDs; Brady Hackebeil 13-109 (48.4), 1 TD; Buddy Santos 7-25 (3.6); Isaiah Oropeza 4-38 (9.5); Leonard Pompa 4-18 (4.5); Sergio Martinez 1-3 (3) Passing Oropeza 3-5 31 yards; Hackebeil 0-2, 2 INT
Scoring summary
DEV—Justin Contreras 46-yard run (PAT failed), 11:19, 1st
DEV—Contreras 59-yard run (Brady Hackebeil 2-point run), 8:54, 1st
DEV—Hackebeil 3-yard run (Jacob Featherly PAT), 3:39, 1st
By Jerel Beaty
Staff Writer