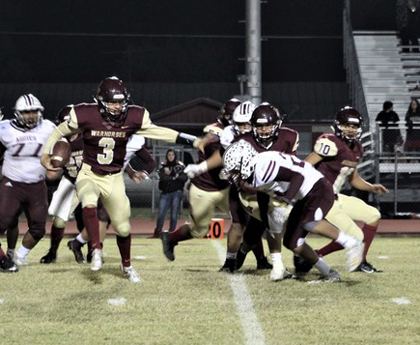 A torrid 21-point first quarter output and an outstanding defensive effort by the Devine Warhorses helped them claim the number one seed in District 14-4A DII in beating the visiting Poteet Aggies on Homecoming last Friday night. The Horses are 4-0 in district and travel to Carrizo Springs trying to claim the outright district championship.
It appeared through the first quarter that Devine was getting ready to stem-roll the Aggies offensively. As it turned out, it was the Warhorse ‘D’ that dominated the story-line the rest of the ballgame. Poteet had only one serious scoring threat the entire night.
“Offensively we started out on fire against Poteet,” stated Head Coach Paul Gomez. “We were hitting all cylinders. Things just came easy. Up 21-0, we got complacent and basically lost our edge offensively. I told the guys that if they want to advance in the playoffs we have to play hard all four quarters. If we can score 21 points in one quarter then so can the other team.”
After Xsavior Martinez returned Poteet’s opening kickoff from the 25 to the 48 yard line, Justin Contreras took the second snap of the game 48-yards for an early 6-0 Warhorse lead.
Devine’s defense recorded its first of several three-and-outs to force an Aggie punt. On the second play of the Warhorse’s second possession, Justin took the ball on a reverse play 59-yards for his second score with 8:54 left in the first quarter. Brady Hackebeil ran in the two-point conversion to put Devine up 14-0.
Poteet later forced Devine to punt, but the Horses had a little trick or treat left in store for the Aggies the day after Halloween
Lined up as the personal protector in punt formation, Brady Hackebeil took the deep snap at the Horse’s 47-yard line and rambled 50 yards to give Devine a first and goal at the three. At quarterback on the next play, Brady scored Devine’s third and final touchdown of the night.
The rest of the game belonged to each teams’ defense. The 21-0 end of first quarter score was also the game’s final score.
Devine produced 354 yards rushing behind an offensive front that continues to batter defensive lines. The Warhorse running backs are feasting on open creases and gashing running holes.
“Justin had a great night running the ball rushing for 161 yards on 12 carries and Brady added another 109 to give us two backs over the 100-yard mark once again,” Gomez said of his team’s leading rusher. “Isaiah Oropeza had some big runs for us as well. Poteet had some big boys on their defensive front so it was tough getting movement at times.”
Consistency
Devine has been able to consistently run the ball against all its District 14-4A competition. Gomez believes the early trials and tribulations from a tough non-district schedule is paying off dividends as the Horses make their playoff push.
“Since we started district and learning from our mistakes in pre-district, we figured out that if we bust our tails Monday through Thursday and stay focused on the task at hand that Fridays will take care of themselves. Early on, we would have a great practice day one day and then turn right back and have a bad day the next. We were very inconsistent. Just like our play on Friday nights were inconsistent. We would have great plays followed by bad plays and were our own worst enemy. We had to learn how to win. We had to learn how much effort it took during the week to play good on Fridays. That is why the journey is the best part of a season. It can teach you so much about yourself and our team. We get ready for this week our first goal was the District Championship and a 1st seed in district for the playoffs. That goal can be attained this Friday vs Carrizo. Then in the playoffs, you never know what can happen! We have had some past seasons where we just got on a roll. That can happen but first thing is first and that’s Friday night against Carrizo,” according to Gomez.
Running wild
Devine has rushed for 1,444 yards in the four district contests for an average of 361 yards per game. Hondo (481), Crystal City (272), Pearsall (337), and Poteet (354) have not been able to slow down the Warhorse’s run game.
With no official stats for most of Carrizo Spring’s ballgames, it is hard to predict what the Horses are capable of putting up on them as far as running yardage. If Devine wins the game, look for its offensive production on the ground to be the biggest reason that the Warhorses walk off the field this Friday night in Carrizo Springs as the outright district champion.
Up next
Devine closes out its district schedule in Carrizo Springs Friday night. Kickoff is set for 7:30pm.
By Jerel Beaty
Staff Writer