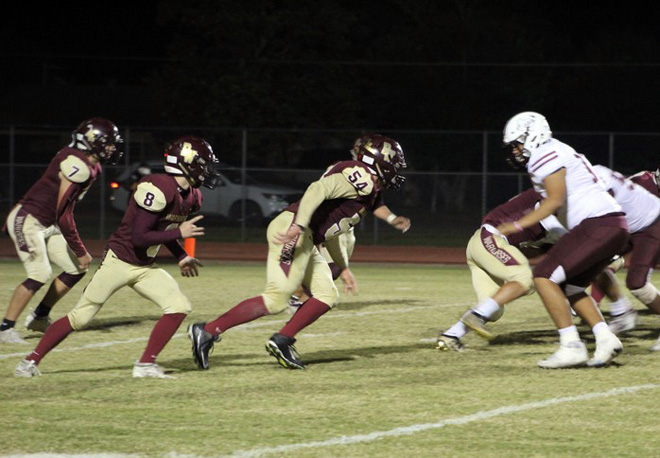 Using a little baseball terminology since the Warhorse football team’s defensive coordinator is also Devine’s head baseball coach, the Horses pitched a complete game shutout in blanking Poteet 21-0 on Homecoming last Friday night. Devine faced one serious scoring threat the entire evening in limiting the Aggies to only 121 yards total offense.
“I am so proud of our defense,” said DC George Villa. “We challenged them because I thought we could have done a lot better job against Pearsall the week before. The players responded with a SHUT OUT!!! This Poteet offense has been putting up points and yards all year long. They had two offensive backs coming into our game with over 1,000 yards rushing a piece. Our defense played with lots of confidence in the scheme and it showed with their aggressiveness. Again, our “shut down” corner, Xsavior Martinez recorded another interception. Brady Hackebeil added to his total as well. Then there is Xavier Contreras running down their running back on their only long run that gave us a chance to preserve the shutout!! Blaine Miller had the big hit of the night on a crossing route!! Christian Gerlach added to his sack total. We had seven tackles for loss and four tackles for no gains. We held them on downs several times and forced them to punt more than 3 times as well. Defensively, our boys are really gelling at the right time. They are figuring it out and you can see the togetherness on the field.”
There was no short of praise to go around for the Devine ‘D’. Head Coach Paul Gomez had this to say.
“Defensively man it was beautiful. That is definitely our best defensive game of the year so far. They had two backs with over 1,000 rushing for the year and we held them to 122 total rushing yards and -1 passing yards. The one long run they did have showed what our defensive mindset was all about. Their back cutback on a run and broke out into the open and looked like he would score. Xavier Contreras never gave up and caught him at the 1-yard line. I have to mention Xsavior Martinez who came from the other side of the formation and passed up three guys to catch up. If Contreras does not get him, Martinez catches him at the 5-yard line. That is all-out hustle. That is never giving up and giving great effort. That is how our defense played. We played assignment defense and played on their side of the ball all night from the defensive front, to linebackers, to secondary! We played great and at the right time of the year. Coach Villa and the defensive coaches had a great plan going in and our boys executed well.”
Special teams
Special teams put their mark on this game as well. Stats do not always tell the whole story, but good kick returns, pressure on opposing team’s punters, covering the field and protecting running lanes sometimes goes unnoticed.
Coach Gomez said, “Special teams was solid again. We knew we could get them on a few special team plays and we took advantage of that. We had a good return on the first kickoff, we blocked a punt, and we almost scored on a fake punt. Extra points were better this week so Coach Taylor had them ready.”
By Jerel Beaty
Staff Writer