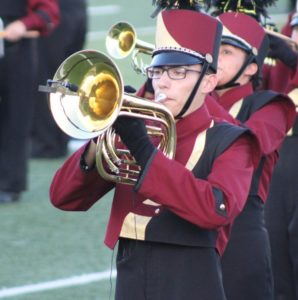 Summer band is right around the corner! Be sure to get physicals done BEFORE summer band begins!
It has become a UIL requirement for all those participating in the high school Marching Band, and this is the first year, so spread the word. If you didn’t get it during the drive before school ended, be sure to get one before the first day of practice so you won’t be behind! Can’t practice without it.
DHS Band Camp starting dates are as follows:
Color Guard & Percussion will work from Monday, July 22nd – July 31 at 8:30 a.m-12 p.m. (Drumline) and 1:30 to 3:30 (Front Ensemble).
Freshmen start Monday, July 29th – July 31 (All incoming freshman) from 8:00 a.m. to 12 noon.
Summer Band Camp for all will start August 1st at 7:30 a.m. – 12:30 p.m. daily; then sectionals 1:30-3:30 daily thru August 16. There will be practice August 19-23 (schedule to be announced).
See the DHS website for the entire summer schedule and the full Calendar for 2019- 2020. Or drop by the band hall to pick up a copy.
Physical due before first day
Physical Forms for 2019 Marching Season can be found on the DHS website under high school band or picked up at the band hall. All high school marching band students must have a physical beginning this year.
Let the Adventure Begin!
This year’s 2019 Marching Show is Bollywood. So, let the Adventure Begin! Directors Jeff Miller, Tom Settles, and James Quintero introduced part of the Bollywood show at the end of last year to the students, so the band is excited and ready to get to work on the full show and help the freshmen learn how to march!
Last year the Devine High School Warhorse Band won SWEEPSTAKES, the coveted grand daddy of them all, the award for winning 1’s at all three of the major competitions, marching, concert, and sight reading! The band is growing and seeing historic numbers and success at every competition last year and looking forward to more this year!
First Football game will be on August 30 at SA Kennedy and the band will perform the first part of the show at halftime, so there is lots of work to be done. Be sure to hydrate this summer and get ready for summer band camp.
By K.K. Calame