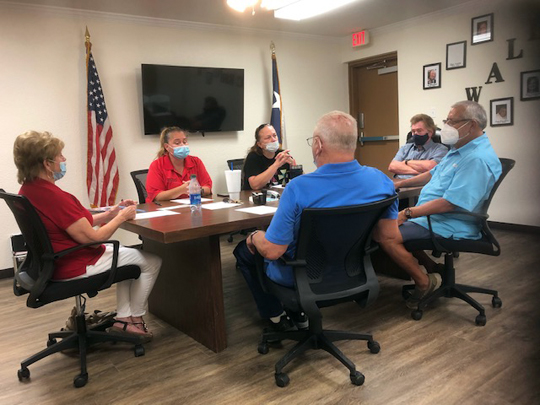 After approving a 2021 budget with $147,155 in reserves, Emergency Service District #4 (ESD#4) is looking for ways to “give back to the community.”
Board President Beth Leonesio called on fellow members to start thinking about projects or events the district could sponsor for residents in its service area, which encompasses Devine, Natalia and surrounding unincorporated areas.
“I want everyone to think about this,” Leonesio said. “We need to do something for the community.”
While the board prepares to discuss ideas at a future meeting, member Bill Marshall quickly suggested that one way of “giving back” would be to further lower ESD#4’s property tax levy.
Earlier, the board voted to adopt a 2020 tax rate of $0.0465 per $100 of valuation. That’s a 6.06 percent reduction from 2019, and should result in no additional taxes for the average homesteaded property.
Marshall said he appreciated the need to keep funds in reserve, and he joined in the unanimous vote to approve the new budget and tax rate.
But Marshall also recalled that he floated a similar tax-cutting idea a few years ago. “That was when our reserve fund wasn’t as big as it is now,” he said.
Leonesio acknowledged that Marshall’s off-the-cuff idea would be “one way to give back,” and urged the board to continue brainstorming community-minded ways to leverage the growing reserve fund, which now represents 35 percent of the district’s $415,785 budget.

Board member Juan Cuellar, reached after the meeting, said purchasing “jaws of life” equipment for local firefighters would be one way to assist a companion agency.
Cuellar said ESD#4 has been “frugal.” He pointed to the renovation and expansion of the Devine headquarters on Dixon Drive as a cost-effective example. “We did that without incurring any debt,” he noted.
In another matter, Cuellar reported that the district would soon receive updated maps of the ESD#4 service area. He related that the maps had been obtained by the Devine News at no cost from Medina County’s 911 office.
Maps have been a longstanding issue for the district, with concerns that outdated maps were hampering Allegiance ambulance crews’ ability to get to their destinations in a timely fashion.
The News reported last week that the average response time for ESD#4 units was running over 8½ minutes, with some calls ranging upwards of 20 minutes.
By contrast, ESD#1 in Castroville and La Coste reported that its 2020 response times through Aug. 31 averaged 6:46 minutes.
Leonesio directed district coordinator Christy Merendon to schedule a meeting with Medina County Judge Chris Schuchart and the Commissioners Court in Hondo next month to further discuss emergency dispatch issues.
By Kenric Ward