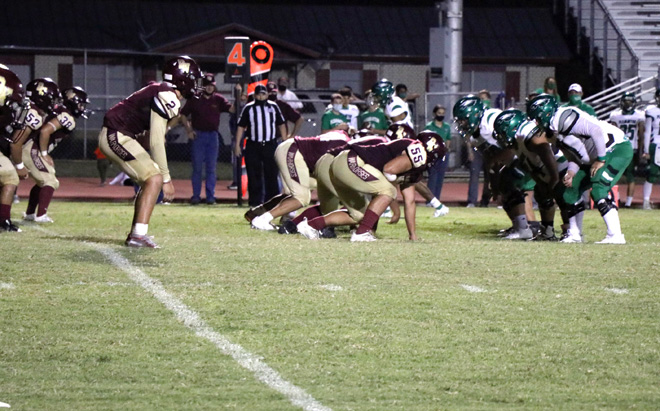 The now 3-1 Devine Warhorses travel to Luling to take on the Eagles Friday night. Luling has had a tough go of it so far this season, going into the contest without a victory to show after playing three games.
Devine looks to continue its winning ways against a Luling team that has plenty of size up front both offensively and defensively.
According to Warhorse Head Coach Paul Gomez, “Luling has some big players. Their defensive linemen are about 280lb to 300lbs. Their defensive ends are athletic and tall and their linebackers are also big.”
Luling also boasts athletic, skill players.
“They have good speed in the secondary; we respect their abilities,” Gomez continued.
Luling has posted some nice offensive stats, but they have not played a complete ballgame to this point.

“They just haven’t put it all together yet but they do have some talent over there. Offensively, they have a dual threat at quarterback. He is a great runner that can take it all the way but he is a good passer as well. We have to keep him contained,” Gomez said about the Eagles leading passer and rusher.
Dario Munoz is the Eagles do-everything player. He has not only passed for 352 yards while completing 49 of 68 attempts and two touchdowns, Dario has also rushed 73 times for 432 yards and five additional touchdowns.
Daylon Houston is Luling’s second leading rusher with 21 carries for 82 yards and one touchdown.
Munoz’s main target when he drops back to pass is receiver Jacob Goff. Goff has 20 receptions for 288 yards and two touchdowns.
While Devine preps for Luling this week, Gomez understands that some things are not within his or even his team’s control.
“We just have to control what we can control,” Gomez said matter-of-factly about where the Horses continue to focus. That is our focus, intensity, and energy in practice. We need game reps in practice. We need to understand that the reason we have been successful the last few weeks is that those things were consistently brought to practice. We have to put our heads down and get to work. Keep climbing that ladder.
By Jerel Beaty
Staff Writer