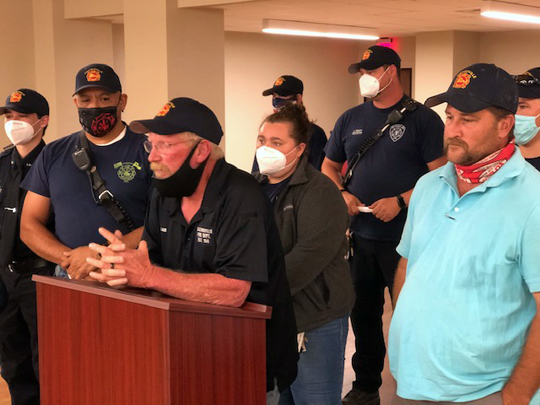 Concerns over relocating a Castroville pumper truck were doused last week when Emergency Services District #1 agreed to keep the equipment at its current fire station.
Castroville Fire Chief Rick Lair objected to a prior request to reassign the truck to the new Rio Medina Fire Station on Potranco Road.
The committee for the new station was given a $1.2 million budget to buy apparatus (including fire trucks) for that station, but had concerns that it was not enough. So they had proposed to take Castroville VFDs second pumper truck to the new Rio Medina Station in the Portanco area, about 40 minutes away.
“Seventy-three percent of emergency fire calls in our district come from Castroville, 13 percent come from Mico and 9 percent from La Coste. We need both of our pumper trucks and tanker right here at the Castroville station when we get called out to a structure fire. We need to be able to attack the fire from more than one angle, and that second pumper truck carries half of our personnel too,” Lair said.
After discussions, the district agreed to keep the truck in Castroville, and to purchase new vehicles and equipment for the Rio Medina station.
Marvin Dziuk, chairman of the ESD#1 board, said the plan is now to buy a water tender, pumper and brush truck for the new station.
“There’s nothing wrong with that plan,” he told the News, affirming the board’s decision.
Lair, speaking for his crew of firefighters, thanked the board for allowing the Castroville station to keep its truck.
“We would like to thank the commissioners for including the fire departments in the issue concerning the truck rotation recommended by the apparatus committee and taking our concerns into consideration,” Chief Lair said.
Meeting on Wednesday, Sept. 16 – just hours after Lair’s concerns were resolved — the board heard that the average bid for construction of the Rio Medina facility came in at just under $2.7 million, below initial projections of $3.2 million.
Rio Medina’s “apparatus budget (including vehicles and equipment ranging from hoses to nozzles) is $1.2 million. Hopefully we won’t spend [all] that,” Dziuk said.
Lair estimates that the Castroville area has around 18,000 residents who have been served by Castroville VFD for many years.

Meantime, to the east, development in the Potranco Ranch area is booming, facilitated in part by funding from a Tax Increment Reinvestment Zone (TIRZ). Using the TIRZ created by Medina County, developers collected a majority of property taxes from homes and improved values in that area until all of their investments are recouped, amounting to millions.
Land for the fire station and part of its funding for construction were provided through the TIRZ. But more is needed, and ESD#1 is left to find a way to provide emergency services to the newly populated areas.
For the Rio Medina station alone, the total budgeted amount (including construction, equipment, and architecture/engineering) was projected to be around $5 million. The TIRZ kicked in some $1.5 million.
There is talk that the district may need several new fire stations if growth keeps up the way it has in Castroville and the surrounding area. The board has discussed a potential need in the LaCoste area and in the FM 1283 area, in addition to the new Rio Medina Station that was already approved.
Tax rate
On Wednesday, the board approved a 2020 property tax rate that will yield 11.94 percent more revenue in the coming year.
Though the tax rate will remain at $0.095 per $100 of assessed valuation, taxable values on an average homesteaded property rose 8.82 percent. That will raise the district’s total tax levy from $1,425,558 to $1,595,752.
The tax on an average homestead would increase from $194 to $211, according to Medina County Tax Assessor-Collector Melissa Lutz.
To keep property tax bills at 2019 levels, the district would have had to lower its tax rate to $0.0886.
By exceeding the so-called “voter approval rate” of $0.0923, ESD#1 could be subject, by state law, to a voter-petition referendum on its new tax rate.
But with no public objections aired at the meeting, and little time remaining for a petition drive before the November election, that prospect appears unlikely.
Prior to their tax vote, board members discussed several ideas for trimming the district’s fiscal 2021 budget. The largest reductions, proposed by board member Rodney Hitzfelder, involved moving some expenditures for the Rio Medina station to fiscal year 2022.
Budget
For 2020-2021, the total overall budget (all fund accounts) was listed at $3,094,389.
Expenses budgeted in the Property Tax Fund were estimated at $1,483,924, with a variance of approximately $14,060 for unforeseen annual maintenance and operations expenses.
The Sales Tax Revenue budget is used for capital improvements and expansion of services. The annual estimated revenue is $1,320,000. The 2020-2021 capital items budget is estimated at $1,026,361
The Retention & Equipment Fund — used to replace equipment personal protection equipment – is budgeted at $49,900.
The Reserve Funds Budget — for matching grants, purchasing smaller vehicles and making other repairs – is listed at $534,204.
All figures are subject to revisions approved at the Sept. 16 meeting, said ESD#1 Administrative Coordinator Polly Edlund. The district must have final drafts to the county by Sept. 30.
By Kayleen Holder and Kenric Ward