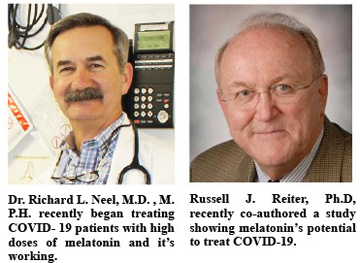 Medina County Texas Doctor Richard Neel announced this week that he is using high doses of Melatonin and Vitamin C to treat two patients for COVID-19 (both confirmed COVID cases), and it’s working.

He believes that high doses of Vitamin C and Melatonin (a powerful antitoxin and antioxidant) can treat the COVID-19 virus that has resulted in a global pandemic.

“I had one patient’s test come back positive this morning, (Monday, April 6). I was pretty sure he was going to be positive for COVID, so I started the patient on melatonin and vitamin C last week and he was much better within 24 hours,” Dr. Neel stated. “This patient in his late 40’s had several days of really high fever that wouldn’t break with Tylenol, a dry non-productive cough, worsening shortness of breath, and loss of taste and smell.”

“His symptoms started on a Sunday, and he talked to me on Wednesday afternoon. He began treatment that night, taking a high dose of melatonin around 8 pm, and he was fever-free when he woke up the next morning,” Neel said. “Then he began taking a high dose of Vitamin C as well as melatonin divided in 4 doses and continued improving, getting his sense of smell and taste back, and his cough got better and better on the 3rd and 4th day.”

“I have another patient who had strong direct exposure to COVID and developed symptoms. They began treatment of high doses of melatonin and Vitamin C and also started doing better in less than 24 hours,” Neel said. “This patient had called me the same day that symptoms began. She had 101.7 fever, body aches, cough increasing, said it really hit her hard. She took melatonin at 6:30, 8:30, and 10:30 pm and was fever free by the morning, and other symptoms continued improving to the point that she was almost totally well by the 3rd day.”

He notes that he has only treated a small number of cases, but feels like the results he has seen need to be reported. Especially as the US death toll from the COVID-19 pandemic surpasses past 10,000 and doctors scramble for treatment.

“People are dying, and I’m asking other physicians if you’ve got nothing else, why not try this?” Dr. Neel said. “I know melatonin inside and out, and believe it is a safe and effective treatment for COVID-19. Melatonin can also be used safely in conjunction with other treatments.”

“The likely efficacy of melatonin to treat COVID-19 stems from its actions as an antioxidant, as an anti-inflammatory agent and to its ability the reduce the effects of other viral agents in experimental models”, said Professor Reiter.

On a side note, Dr. Neel also stated that he did advise two middle-aged patients in Travis County to begin taking melatonin weeks ago after the healthcare worker and her spouse developed COVID symptoms as it hit Texas.

“That was weeks ago. However, they were not able to get tested for COVID-19 due to the shortage in testing, but they were experiencing all of those same symptoms and also reported being fever-free within 24 hours of starting melatonin and Vitamin C treatments,” Dr. Neel said.

He warns that high doses of melatonin are only to be used in cases where a doctor highly suspects COVID-19, and that you should always speak to a doctor for proper dosing.

“Dosages are based on symptoms and age. I wish I could give a blanket recommendation on dosage, but I just can’t. So far, dosage of these patients has been ranging from 40 to 80 mg of melatonin divided in 4 doses during the day. Vitamin C dosage has been from 500 mg to 1000 mg 4 times per day. I want to be clear these high doses are only appropriate for people who actually have the virus, and you need to talk to a doctor first.”

“If you want to take Melatonin and Vitamin C as a prophylaxis, a low dose might be helpful as a preventative measure,” Neel said. “I do have colleagues who believe that taking 5 mg daily is a good thing to do.”

Neel is optimistic about what the powerful antitoxin and antioxidant Melatonin can do, as well as Vitamin C, and he hopes that the medical community will do the research that is needed for it to take foothold in daily practice of fighting many illnesses, including the COVID-19 pandemic.

“The medical community needs to really start researching melatonin because I think it will be effective in treating so many other things as well including bacterial infections, heart attack, strokes, and more,” Dr. Neel. “Just look at what it did in the study of septic babies.”

In an article published March 20, Dr. Neel stated, “I believe doctors need to start using melatonin to treat patients now, today, to save lives, in conjunction with other treatment. I think it could keep a lot of people from having to go to the hospital as well. There’s enough research out there to prove it’s effective in fighting viruses like this. Further research could help tweak dosing, but melatonin is non toxic and available to everyone over the counter.”

The US death toll from COVID-19 surpassed 10,000 this week, with New York being hit the hardest so far. New York newspapers report “The state’s hospitals are inundated, morgues are overflowing, and many medical workers are forced to wear trash bags due to a lack of protective gear.”

Newspapers reported that New York Gov. called the coronavirus “truly vicious,” and described it as an “effective killer.”

To learn more about melatonin and medical studies that have been done, read our previous article here.

Editor’s note 4-9-20: Since this article’s publication, Dr. Neel has received confirmation that the patient whom he suspected had COVID-19 has tested positive for it. The article has been edited to reflect as much.

Dr. Richard Neel served on the team of chemical and biological weapons experts for the Pentagon from 1998-2003 and holds a Master’s Degree in Public Health from Harvard.  He is now a co-owner of The Little Alsace Urgent Care Clinic in Castroville and Uvalde, TX.