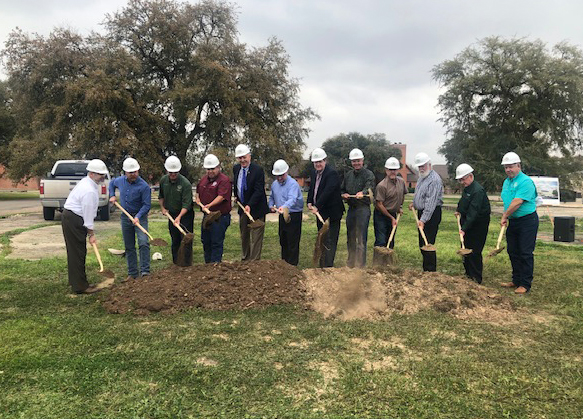 County officials and contractors broke ground on a major project for Medina County, beginning with the new county annex. Construction should begin soon and be complete by April 1 of next year, according to Pct. 4 Commissioner Jerry Beck.

The projected cost of the annex is $12 million, which will be funded by roughly $2 million in county reserves and a Tax Anticipation Note. RVK is the construction company.
The two-story courthouse annex will house the County Clerk, County Treasurer, Commissioners Court, Elections office, Human Resources, and an auditor on the ground floor, while the top floor will consist of the District Clerk’s office and two large courtrooms.
The two floors share a similar layout, making the building flexible for future growth.
Commissioner Jerry Beck said the new annex will provide much needed courtroom space, and that the new jail expansion will be the next major project on the agenda. It is projected to cost $10 million, and will begin a couple months after the annex starts going up.
The jail expansion will increase inmate capacity from 96 to 192, as well as increase the size of the sally port and create a separate jail entrance, leaving the front of the building as access to the Sheriff’s office and courtroom.
Sheriff Randy Brown stated, “We have an average of 20-30 inmates at any given time that we are having to house in other counties due to lack of space in Medina County. We are having to pay about $50 per day/ per prisoner, and that’s just for their room and board in other county jails. Do that math on that. It is also going to be a lot easier and efficient to have all of the incarcerated persons under one roof here in Medina County, rather than being spread across 5 other counties and having to transport them back and forth for court dates.”
By Kayleen Holder
Editor