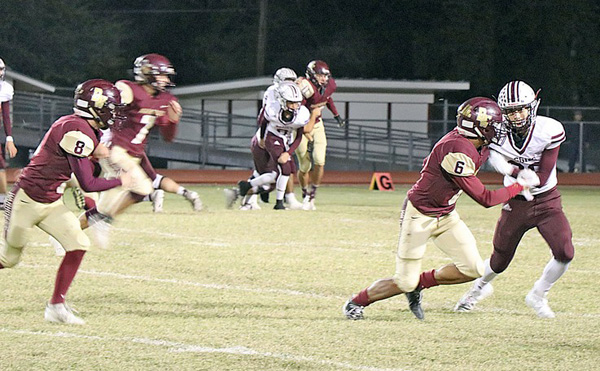 With their 21-0 victory over Poteet, the Devine Warhorses wrapped up at least a share of the District 14-4A DII championship. I do not believe the Horses care much about sharing that title with our cross-the-creek neighbors.
In order to be the outright district champion, Devine must win Friday night in Carrizo Springs. With a Warhorse loss against the Wildcats and a Hondo Owl victory at home against the Crystal City Javelinas, both teams would technically be classified as co-champions. Devine has already clinched the number-one seed in the district.
Devine’s coaches, players, and Warhorse Nation is fully aware of what this Wildcat game means. According to Gomez, “The next step is to win the District Championship outright. With the Poteet victory, we clinched the number one seed in our district but we still need a win versus Carrizo to be the sole district champs. Every week we talk about our opponent being the team that can keep us from attaining the ‘Gold Ball’ and that team can take away everything that we have worked for. We have not been looking ahead but have been working our way up the ladder. So now, we have come to the last district ballgame. Carrizo is the only team in the way to an outright district championship. Since last November, we have talked about working and dedicating ourselves to winning a ‘Gold Ball’ and not sharing it with anybody. If we cannot get ready to play this game then something is wrong with us. That itself should be all the motivation needed to have a great week.”
Gomez breaks down his assessment of Carrizo Springs.
“Offensively they have a really good running back in Joshua Carrizales (#22). He is a junior with really good speed. Their quarterback Mark Maldanado (#2) is a tough, aggressive runner and he throws the ball well. They will do some good things offensively to try to put us in some binds so our defense has to be ready for the challenge. They have a good defense that is very aggressive and tries to put pressure on teams. We are going to have to pound the ball and take advantage of man-to-man coverage in our passing game. Carrizo will give us everything they got because they are playing for a playoff spot. If they beat us then they are in playoffs; if they lose, they are out. They will be inspired and play their best game against us. We have to match their intensity and have a great week of practice. I’m excited for the opportunity and can’t wait to get to work.”
District-wise, Carrizo beat Poteet 32-28 in week one. Three straight losses followed, however. Week two saw them lose in Pearsall 25-18, week three they went down 35-7 at home to Hondo, and then lost last week’s contest in Crystal City 19-15.
The Wildcats have lost some close, pivotal games two of the last three weeks. Warhorse Nation, time to dress in maroon and get to Carrizo Springs Friday night to celebrate the Horse’s outright district championship.
Kickoff is set for 7:30pm.
By Jerel Beaty
Staff Writer