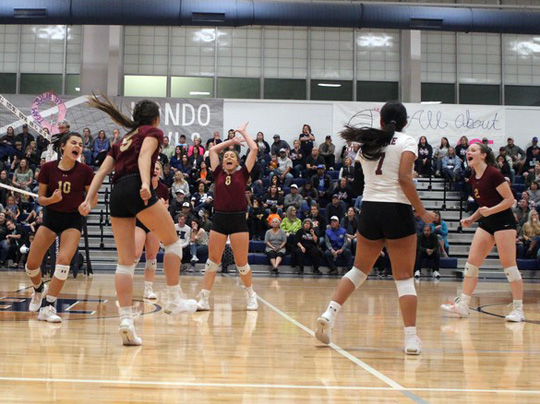 After Hondo beat Devine at home on October 11th, the Arabians knew beating the Owls on their court would be the biggest payback of the season. In their last district game, the Arabians did just that with a 3-2 victory in Hondo and earning them the second seat in a tough district. The Arabians played Pleasanton last night in the Bi-District playoff game at Southwest Legacy.
In their final district game, the Arabians had to work hard for every point. Devine took the first set 25-23 but then lost the second and third sets 21-25 and 24-26. In the fourth set, the Arabians took the score to 28-26 for the win and momentum in the final set to win it 15-13.
“What a game!! This was a total team effort to win tonight. Both teams left it all out there on the court. We were able to stay calm and stay disciplined when it counted. I am very proud of the girls for never giving up and to keep fighting. Things have not always gone our way this season and the girls never threw in the towel. They kept pushing and fighting each game this season.” Coach Leigh Ann McIver
Kills: Megan Runyan 17, Bailey Oropeza 3, Macey Hein 6, Aleyna Gerlach 2, Janaee Wofford 5, Madison Pike 1, Jasmine Pompa 1. Aces: Runyan 2, Gabby Rodriguez 4, Wofford 2. Blocks: Runyan 1, Oropeza 1, Hein 1, Gerlach 1, Wofford 1, Pike 4. Digs: Allison Stevens 5, Runyan 42, Myla Miles 14, Oropeza 8, Rodriguez 53, Hein 34, Gerlach 11, Wofford 27, Leah Herrera 6, Pike 6, Pompa 1.
By Dicy Chambers
Sports Writer