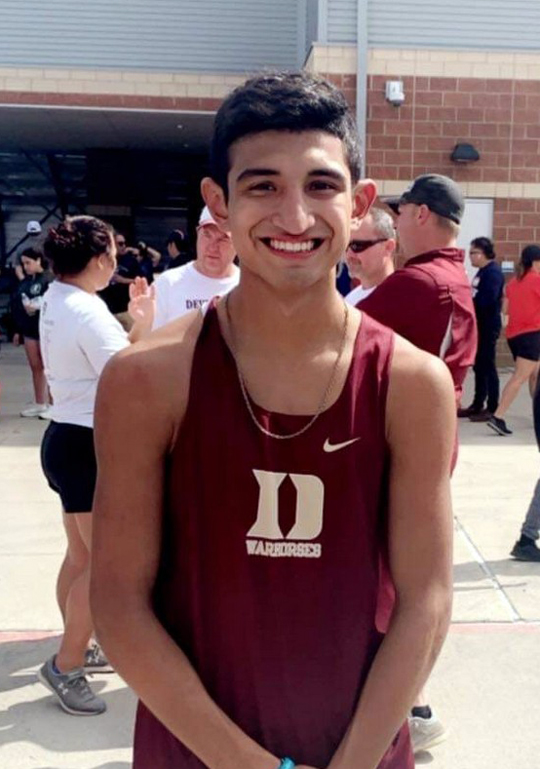 Junior Devine Warhorse Cross Country runner Xavier Garza runs at State this Saturday at 12:30pm. More than 150 runners will toe the line to begin the Class 4A race at Old Settlers Park near Dell Diamond.
Xavier qualified for State by finishing 16th overall at Regional in Corpus Christi on October 28. As a sophomore in 2018, Xavier finished 45th which is quite an improvement in a time of only one year.
Making State has been his goal since the end of last Cross Country season. Xavier took the necessary steps to ensure success, which is sticking with his summer running routine. Runners who do not run in the summer might as well not run if they have dreams of achieving big-time goals.
Xavier finished fifth at the District 29-4A meet in mid-October. Knowing that one of our district schools more-than-likely did not have a realistic chance to make it to Round Rock as a team, Xavier’s chance of making it to state as an individual qualifier was slim but not none.
In order to make it, he was going to have to beat three or possibly all four of the runners in Corpus that beat him on his own home course in Devine. That challenge was daunting enough. However, he accomplished just that.
His work ethic is the best. He believes in himself and pushes himself harder than any male runner that I have seen in my short time as a cross-country coach. He has the ability to push himself to be the best every time he steps onto a course or comes to a practice. I do not believe he even knows what an “easy run” is.
He has been amazing to watch this season. Xavier did all he could to get the rest of the Warhorses to push themselves to Regional as a team, but the team fell three points short.
I hope that with his State appearance this season, other runners will jump on board and train harder in the summer and be more cognizant of what is being required of them in practices.
Running buddy
Xavier has not been alone in his training for Regional or for State. Fellow junior Matthew Madrid has been with him the whole way helping in any way that he can. Cross Country training is not easy; it is not something that anyone would just do for fun.
It says a lot about Matt as an individual and is speaks volumes for their friendship about what Matt is willing to do for Xavier. I find that extremely commendable.
Sendoff
There will be a sendoff for Xavier Friday morning from the Devine High School teacher parking lot down Dove Street. The traditional ‘wake-up call’ is schedule from 8:40am to 8:50am. The student body will gather directly afterwards to cheer on Xavier and wish him well.
Anyone outside of the school district is encouraged to line Dove St. or Hondo Avenue as Xavier leaves for the most important race of his career.
By Jerel Beaty
Staff Writer