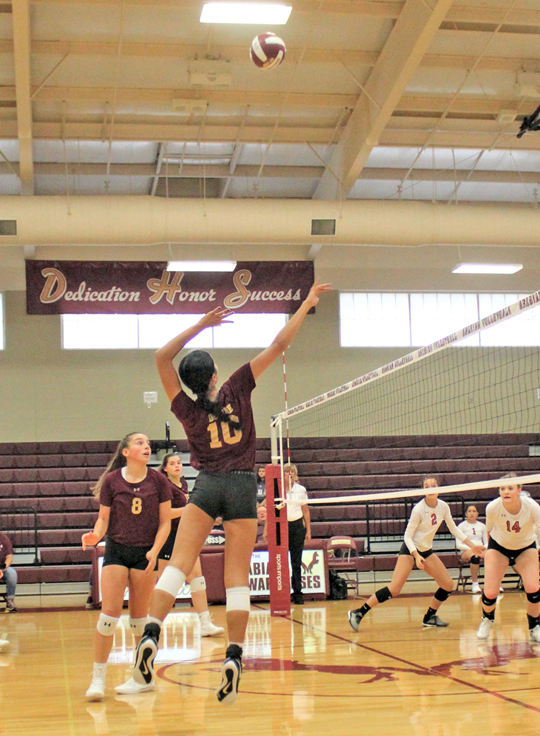 Last weekend at the Arabian Round Up, the Varsity team struggled some during pool play but turned it around on Saturday to win the Consolation Bracket. Pool play started off against Llano and was a great win at 25-17 and 25-19. Highlands was tougher and after three sets, Devine lost 15-22, 18-25, 15-25. Devine struggled to get the lead against D’Hanis and lost 19-25 and 21-25 ending their pool play 1-2. “I thought the girls played really well against Llano and Highlands. The Highlands game might have been our best game of the year. But we came out real tense against D’Hanis and we could not do much positive with the ball,” stated Coach McIver.
In the first game of the consolation bracket, the Arabians had to get into a new rotation without Megan Runyan, who will be out at least six weeks due to a shoulder injury. “I think it took us a while in the first set to adjust and get comfortable. But the girls took control in the second and third set,” said Coach McIver.
Devine beat Fox Tech 23-25, 25-10, 25-18.
SA Feast was able to get some good serves past Devine’s receiving and not allow them to set up an offense but they pulled off the win at 25-15 and 25-8.
In the final game of the consolation bracket, Devine faced Pleasanton and made quick work of the Lady Eagles at 25-21 and 25-15. “Last game of tournament took us a while to get going in this game but once we picked up our energy the momentum came our way and we rolled with it,” said Coach McIver.
Tournament Stat Totals: Kills: Runyan 18, Bailey Oropeza 22, Macey Hein 14, Aleyna Gerlach 17, Janaee Wofford 5, Destiny Moralez 2, Madison Pike 16, Jasmine Pompa 16. Assists: Hein 84, Allison Stevens 1, Gerlach 1, Wofford 1, Pike 2, Pompa 3. Aces: Stevens 6, Runyan 2, Mayla Miles 5, Kaylee Howard5, Hein 6, Wofford 8, Moralez 1, Pike 2, Pompa 4. Blocks: Hein 2, Moralez 8, Pompa 2. Digs: Stevens 78, Runyan 18, Miles 21, Howard 21, Oropeza 9, Gabby Rodriguez 4, Hein 32, Gerlach 19, Wofford 45, Moralez 1, Pike 5, Pompa 12.
By Dicy Chambers
Sports Writer