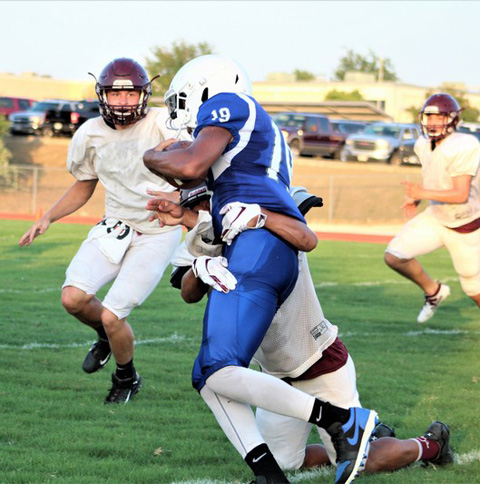 Devine saw its first action against unfamiliar foes last Friday evening in Bandera as the Warhorses took on the Bulldogs. Although the teams tied at one touchdown apiece for the night, improvement was evident throughout. Head Coach Paul Gomez’s assessment of his squad’s initial scrimmage.
“The boys played really hard on Friday vs Bandera. We made plenty of mistakes but played hard. Everything is fixable. Offensively, we moved the ball up and down the field all night. We need to improve on our blocking, as it seemed like we took turns missing blocks that could have went for big gains. In fact, we were one block away from having big gains and maybe touchdowns several times Friday night.
Even though we only scored once, we did have several very encouraging plays. We were very basic in our play selection because we wanted to concentrate mostly on execution and communication. Both quarterbacks did well on Friday.
Isaiah Oropeza made some good decisions and threw the ball well. Had some good throws on some big plays down the field while Brady Hackebeil did a great job running the ball. He is hard to bring down and had some good runs including the touchdown run. He struggled in the passing game but I know he will keep improving. His ceiling is high and he will only get better.
Coach Wells has done a good job with these two and they will continue to get better. Our offensive line did ok for their first scrimmage. They need to improve on their communication. We missed on a few combo blocks where nobody climbed up to get the linebacker and it kept us from having some big plays. I expect them to have a better showing this week vs Navarro with another week of learning from Coach Devin Rotramel.
We also need to do a better job of perimeter blocking from our wide receivers. We struggled a bit and it kept us from having some big plays. That being said I think Coach Scott Taylor’s boys have a chance to be a very solid bunch this year. We will work more on our blocking and I expect them to improve this week. They did a good job of catching passes on Friday although route running still needs work.
I think our running backs ran hard Friday. We need to keep working hard and getting better as this group has some good talent. Fabian Santos had some good hard runs. I was very pleased with his effort. Xsavior Martinez had a long run early on but had to sit out the remainder of the scrimmage with a tight hamstring. Coach George Villa will have these boys ready to go.
Defensively I think the boys did well. We got many hats to the ball and played aggressively. We did a good job tackling and our effort was good. We only allowed one score so overall not too bad. We were very vanilla defensively as Bandera has a new head coach and we did not have any film on their offense to prepare for. All we had was that they ran the ‘I’ formation with a tight end. They had some good plays on us in the passing game but for going into this scrimmage blindly, I think our defense was a bright spot.”
Up next
Devine hosts Navarro Thursday at Warhorse Stadium. Freshman at 5:00pm, JV at 6:00pm, Varsity shortly after 7:00pm. Take bath towels for admission.
By Jerel Beaty
Staff Writer