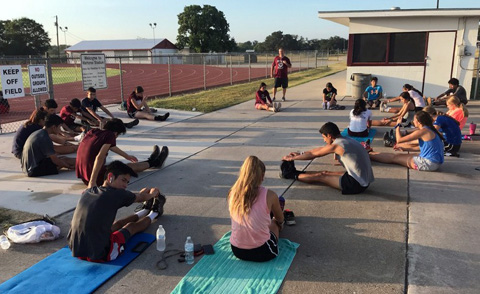 Three weeks into training, the Devine Warhorse and Arabian Cross Country teams finally get a taste of true competition this Wednesday and Saturday. Devine Municipal Golf Course is the sight for Wednesday, August 21st as a Pre-Season Mini-Meet involving Carrizo Springs, Harper, Freer, and Pleasanton begins at 8:30am with the JV girls. The varsity girls run next followed by the JV boys and finishing with the varsity Warhorses.
Saturday, August 24th, the four teams are in Pearsall. The varsity girls run at 9:00am followed by the varsity boys at 9:30am, and the JV teams will run simultaneously at 10:00am.
Three phases
The training season started in Phase One which is a practice environment with lots of easy-paced, long-timed runs instead of runners trying to hit certain daily mileages. I believe it is important for runner’s bodies to build a base reference point for tolerance to work load so Phase One has been mostly for body-adaption.
Phase Two includes increases in pace and distance, more strides, and more detail to certain aspects of each individual’s racing component with continued concentration on racing form and posture. Phase Two naturally leads into Phase Three, or the Championship Phase, as we get closer to October which is District, Regional, and hopefully, State competition.
No shortage of respect
I have a tremendous amount of respect for all Cross Country runners. I have told them on multiple occasions that Cross Country is the second most demanding sport out of all sports at the high school level. I rank it right behind football and football gets the nod because of the physicality of the contact occurring daily at practice and the high intensity hits on Thursday or Friday nights.
Cross Country runners push their bodies to a limit that only a true runner can understand. I will admit that I do not even know what that threshold feels like because I never trained for running as hard as what I ask my own runners to train.
Long story short, if you get a chance to come out to support the Cross Country team, please do. Cross Country does not get the glamour that some of the other sports do, but it is an extremely tough sport and all these ‘kids’ are appreciative of all the support they do get.
Runners of the Week
A staple for the last couple of years for Cross Country has been a weekly ‘Runner of the Week’ award given to a team member or members who go above-and-beyond in some capacity. It is not always solely based on race-results as it could be something they do for a fellow teammate or out in the community.
The first ‘Runner of the Week’ award will be in next week’s paper. Stay tuned.
By Jerel Beaty
Staff Writer