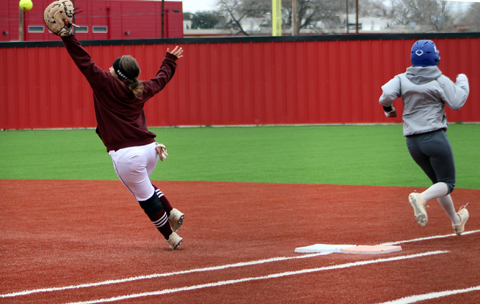 In their only game last week, the Arabians headed to D’Hanis on March 8th but came home with a 1-14 loss. Now 5-11 for the season, the Arabians are set to open district in Pleasanton on Tuesday, March 22nd and then face Somerset on Friday, March 25th.
Taking on D’Hanis on March 8th, the Arabians opened the game with a run in the first. D’Hanis took the lead and was up 3-1 after the 2nd inning, the Cowgirls rallied and scored 9 runs in the bottom of the third and 2 runs in the bottom of the fourth. The game finished after the top of the fifth with Devine down 1-14.
Skylar Blanton threw nine first pitch strikes and one strike out. Makayla Perez threw six first pitch strikes and one strike out. Devine had three hits in this game and Natalie Valle had one hit.
With Pleasanton, Hondo, Somerset, and Brooks Academy in the district with Devine, the Arabians will have to work hard to earn a playoff seat this season. Currently Pleasanton is 9-2, Hondo 11-9, Somerset 7-7, and Brooks has a 0-2 reported record.
By Dicy Chambers
Sports Writer