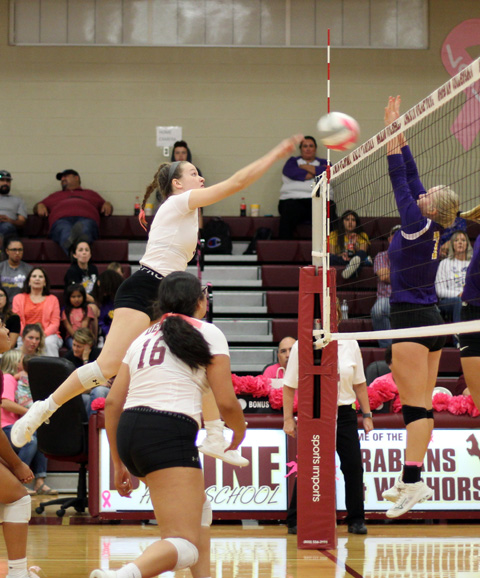 Crystal City
Crystal City has been playing stronger the second half of district and took the Arabians by surprise on October 18th.
“This is the best we have played all year long. Even though we had some miscues during the night, this was the best we have competed in a long time. Everyone was contributing and it was a team effort.” Coach Leigh Ann McIver
Devine won the first set 25-23 then lost the second and third sets 25-27 and 18-25. They pushed hard and came back to win the fourth set 25-17. The final set was a tight back and forth until the very end with Crystal City taking the win 17-15. This loss put the Arabians 4-2 and still holding on to second place behind Hondo.
Kills: Megan Runyan 22, Bailey Oropeza 3, Macey Hein 2, Madison Pike 6, Jasmine Pompa 1. Aces: Allison Stevens 2, Runyan 1, Myla Miles 2, Gabby Rodriguez 2, Hein 7, Janaee Wofford 1. Blocks: Runyan 3, Aleyna Gerlach 1, Pike 4. Digs: Stevens 3, Runyan 8, Miles 18, Oropeza 4, Rodriguez 31, Hein 33, Gerlach 4, Wofford 19, Pike 10. Assists: Hein 10.
Pearsall
Friday night was a recovery game for the Arabians; they faced Pearsall and played a game that was up to their standards after the loss to Crystal City on Tuesday. They crushed Pearsall 25-5, 25-12, and 25-8.
“I thought the girls played much better than the last time we played Pearsall. We were quicker on defense, more aggressive and kept our focus the whole time. We did miss too many serves for my liking though.” Coach Leigh Ann McIver
Kills: Megan Runyan 11, Bailey Oropeza 7, Gabby Rodriguez 1, Macey Hein 3, Aleyna Gerlach 4, Janaee Wofford 3, Madison Pike 4, Jasmine Pompa 1. Aces: Allison Stevens 3, Myla Miles 1, Rodriguez 2, Wofford 2, Destiny Moralez 1, Leah Herrera 4. Blocks: Gerlach 2, Pike 3. Digs: Stevens 12, Runyan 2, Miles 7, Oropeza 3, Rodriguez 29, Hein 3, Gerlach 4, Wofford 9, Pike 2, Pompa 1. Assists: Hein 31.
The Arabians played their final game last night against Hondo. As of Monday the district is led by Hondo at 6-1, Devine 5-2, Carrizo Springs 4-4, Crystal City 3-4, and Pearsall 0-5. Bi-District games will be announced after district play is complete. The game will be held November 4th or 5th.
By Dicy Chambers
Sports Writer