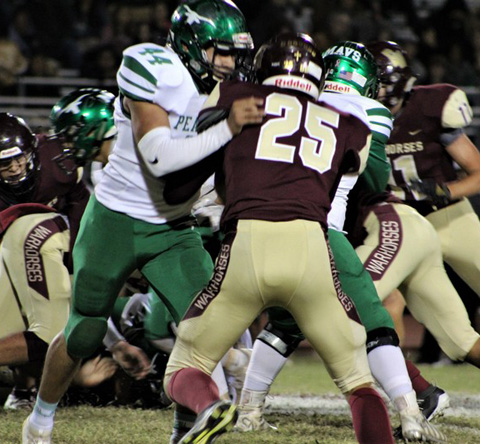 Game ball #1
Sophomore Xavier Contreras was all over the field against Pearsall to earn game ball #1 recognition for his performance Friday night. Xavier showed he is a player who never quits on a play early in the game. After the Mavericks scored on their opening drive of the night, Justin Contreras, Xavier’s older brother, returned the ensuing kickoff 82 yards for a touchdown.
So how does Justin scoring get Xavier a game ball? At one point during the return around midfield, Xavier was actually two to three yards behind Justin making blocks on the play. By the time Justin got to the 10-yard line, Xavier had caught up to the play to make the touchdown-clearing block.
Xavier also stripped the ball from the grasp of Pearsall’s quarterback as he was scrambling out of trouble. Although the Warhorses did not recover that loose ball, it did take a drive away from the Mavericks.
Game ball #2
Defensive linemen Tristin Kannard got an early Christmas present as he trounced on a Pearsall fumble in the end zone with 4:25 left in the first half. Sergio Martinez stripped the Maverick’s quarterback as he was chased backwards toward the Warhorse end zone.
After the strip, Kannard recorded his first career touchdown, and first game ball recognition.
Game ball #3
The Warhorse linebackers had a great night against Pearsall to earn game ball #3 recognition. Sergio Martinez had a recovered fumble, a forced fumble, three solo tackles, two half tackles, and four assists. Hunter “Murph-dawg” Maxwell had two assists and a half tackle.
“Murph had a great game where there were not many stats to show, but he did his job above and beyond. He destroyed blocks all night. Serg had another great game making plays and getting turnovers,” said backer’s coach Evan Eads.
Game ball #4
In the article recapping the Pearsall game, Coach Gomez emphatically stated that the Warhorse offensive line consisting of John Schnautz, Jesus Hernandez, Geoffrey Seal, Aaron Rivera, Jayce Hackebeil, Christian Robles, Darrin Lafferty, Tristin Kannard, along with tight ends Christian Gerlach and Kannon Ramirez “deserve a game ball!”
Well, for those of you that do not know, Coach Gomez is quite a bit bigger than I am. I also have no doubt that he could beat me pretty badly in an arm wrestling competition. Therefore, game ball #4 is really a no-brainer but not because I am chicken or anything like that.
The Warhorses have chalked up 1,090 yards rushing over the last three ballgames. That stat simply cannot be overlooked in this multiple, game ball #4 recognition.
Game ball #5
Superstitions are real. This particular game ball has a weird feel to it however; I think it is a well-deserved honor for some much deserving inanimate objects.
The Warhorses three consecutive district-opening victories have all come with Warhorse players sporting gold uniform pants. Coach Heath Poppe, also a Warhorse baseball coach and known superstitionist, is responsible for handing out game day attire.
In the district-opening win against Hondo, the Horses sported gold pants and cruised to victory over the Owls. The players were initially given white pants to wear in Crystal City. Oh no no, that was not going to work after the way they played against Hondo.
Last minute, Poppe had to swap out white pants for gold pants and the Warhorses went on to spank Crystal City 48-12. Now, yet another game of 40+ points? Outstanding.
Congratulations gold pants on your game ball #5 nomination. You earned it!
Team stats
Total yards Dev 347, Pea 295 First downs Dev 18 Pea 17 Rushes-Yards-Avg Dev 45-337-7.49 Pea 32-180-5.63 Comp-Atts-Yards-Int Dev 2-7-10-0 Pea 4-13-115-1 Fum-Lost Dev 1-1 Pea 4-3 Penalties-Yards Dev 4-50 Pea 4-20
Warhorse stats
Passing Isaiah Oropeza 2-7-10 Rushing Justin Contreras 12-114, 3 TDs; Leonard Pompa 12-84, 2 TDs; Brady Hackebeil 9-58; Buddy Santos 6-45, 1 TD; Sergio Martinez 1-17 Receiving Contreras 2-10
Scoring summary
PEA—Joey Amaya 48-yard pass from Brady Blackburn (PAT failed), 6:45, 1st
DEV—Justin Contreras 82-yard kickoff return (Jacob Featherly PAT), 6:31, 1st
DEV—Buddy Santos 22-yard run (Featherly PAT), 6:15, 1st
PEA—Amaya 29-yard pass from Blackburn (Alex Enriquez 2pt conv.), 3:11, 1st
DEV—Leonard Pompa 2-yard run (PAT failed), 10:35, 2nd
DEV—Contreras 8-yard run (Santos 2pt conv. run), 8:08, 2nd
DEV—Tristin Kannard fumble recovery in end zone (Featherly PAT), 4:25, 2nd
PEA—Amaya 33-yard pass from Blackburn (Aaron Castillo PAT), 10:03, 3rd
DEV—Leonard Pompa 1-yard run (Featherly PAT), 4:03, 3rd
PEA—Blackburn 43-yard run (Castillo PAT), 1:34, 3rd
DEV—Contreras 12-yard run (PAT failed), 9:13, 4th
By Jerel Beaty
Staff Writer