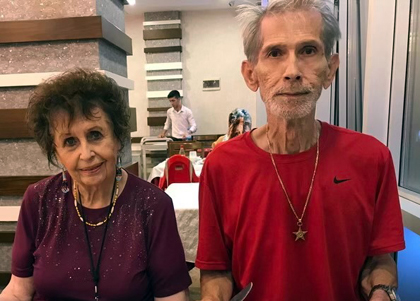 Clyde & Betsy Bonnelycke
Vietnam Vet Clyde Bonnelycke, of Lytle, earned 3 silver stars- 1 as a Marine and then 2 in the Army. He may be the only member ever to receive a silver star as both a Marine and from the Army!
According to an article in the Navy Times, “Sgt. Clyde Bonnelycke and his Marines were pinned down by Viet Cong forces that were raining down small arms and automatic weapons fire from fortified sites north of the Cua River in Quang Tri Province. The grunts of Company C, 1st Battalion, 3rd Marines, were there on Jan. 19, 1968, in support of a vastly outnumbered friendly unit operating near the demilitarized zone. Bonnelycke knew he had to act to repel the onslaught coming from a bunker that was nearly in spitting distance. In a life or death maneuver, he charged through a hail of enemy rounds to the site just 80 feet away, uncorked a grenade and tossed it in, wiping out the enemy and silencing the hostile gunfire. This brave act enabled his platoon to carry out its attack and defeat the enemy.”
“The 28-year-old returned home that summer to Tacoma, Washington, where his father was serving as an Army officer at nearby Fort Lewis. As a combat vet with 10 years in the Corps, Bonnelycke quickly found that civilian life was not for him. So he raised his right hand and joined the Army. Bonnelycke finally returned to Vietnam in 1969 as a platoon sergeant with Company C, 2d Battalion (Airmobile), 8th Cavalry, 1st Cavalry Division. Just about 18 months after the battle in which he earned the Silver Star as a Marine, he was with his platoon’s point element in TayNinh Province when enemy forces ambushed them, wounding several soldiers. Bonnelycke maneuvered to his wounded machine gunner and picked up the weapon, then laid down a base of fire, enabling his platoon to mount its attack. Bonnelycke kept firing until he was out of rounds, then seized several grenades and attacked an enemy bunker, silencing it. For his actions that day, Bonnelycke received his second Silver Star. And he wasn’t done yet. Exactly one month later, on Aug. 12, 1969, now-Staff Sgt. Bonnelycke earned yet a third Silver Star: When enemy forces launched an intense rocket, mortar and ground attack on his base, evacuated the wounded personnel to safety, then sprayed suppressive fire on the enemy with a machine gun, grabbing another weapon when his ran out of ammo.” (Source: Navy Times)
Mrs. Bonnelycke is also a veteran, having served with the US Army Corps of Engineers, department of defense. She was deployed to turkey and served in a war zone in Iraq.
The couple spent nearly 22 years overseas and when they came back she was sent to Lackland Air Force Base and that’s how they became part of Lytle Texas, making their home here in 1995.
His prestigious awards can be seen at: https://valor.militarytimes.com/hero/23290 http://www.vva535.org/newsletters/VVA2015-03.pdf

CPL Gilbert Garcia
CPL Gilbert Garcia got his Bronze star for an action March 25, and 2 purple hearts. He was leading his squad out on an ambush patrol. When they were about 400 yards outside the company perimeter, Viet Cong mortars started shelling the company in a prelude to an attack. Garcia spotted the mortars, radioed for the artillery, and broke up the attack. The next day on another patrol he lost his legs. Gilbert Garcia is currently 79 years old and living in Devine.

Sgt. Michael Rodriguez Jr., US Marines
Submitted by Vanessa Rodriguez
My husband Michael Anthony Rodriguez, Jr. served 11 years in the United States Marines. He did 3 deployments (OIF, OEF, and humanity to Haiti) and has received many awards as well as medals while serving his country.
A long line of veterans spanning generations….
By Barbara LeCompte-Briseno
What makes these men special? They are my family. They fought in WWI, and WWII, Vietnam, Desert Storm, and Afghanistan. PLEASE NEVER FORGET SPOUSES AND CHILDREN ARE VETERANS AS WELL.
I come from a long line of Veterans and hopefully more generations in my family will emerge later. Thank you to all the men and women who have served. Your sacrifice has NOT gone unnoticed.
“ALL GAVE SOME, SOME GAVE ALL.
THOUGH WE MAY NOT KNOW THEM ALL, WE OWE THEM ALL” 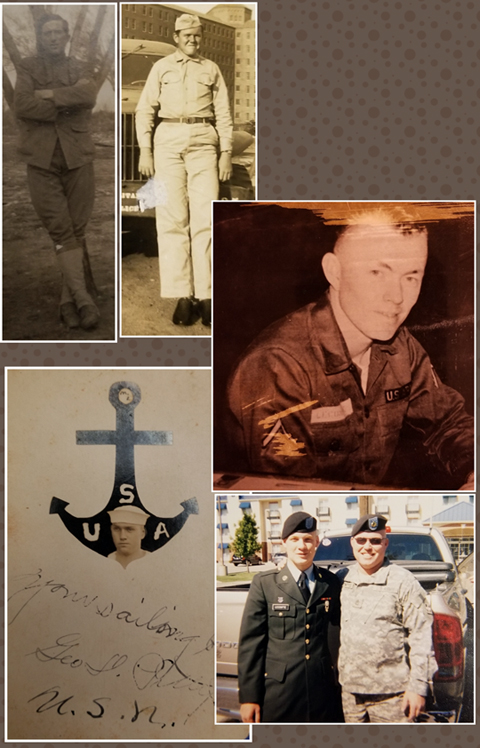 Sgt. Jordan Davis, US Army
Jordan Davis, Sergeant First Class, US Army from Devine. Currently stationed out of Ft. Bliss. He has been in the Service since High School graduation in 2003. He has a wife, Jaimie, son, Johnny and stepson, Brandon, who now has twin sons of his own. He has traveled the world, doing two tours in Afghanistan and one in Iraq, along with other deployments and is a very honorable soldier who loves his family, his country, and our God.

Sgt Austin Wilkins, US Army
By Wilda Kay Weyel
Today take the time to thank a soldier. The willingness of a Veteran to sacrifice their life for our country has earned them our lasting gratitude. Thank you to my son Staff Sergeant Austin Wilkins for your service. Miss you dearly. I can’t wait until you’re home.
Wilkins (pictured in the middle) has served 4 years and is currently deployed to Poland as part of Operation Atlantic Resolve. He has also served in the UK, Paris, Romania, Hungary, and Czech Republic. He graduated from Devine HS with the Class of 2010.

Master Sgt Glen Cathey, US Army
By Kami Wagoner
My grandfather Glen Cathey was a Master Sergeant of the U.S. Army, serving in the 45th Infantry Division known as The Thunderbirds. Starting in North Africa, his division followed General Patton to Sicily in Operation Dragoon, and then through Italy, Southern France, and Germany, where he took part in the liberation of Dachau. He then returned to service with the division in 1951, going to serve on the front lines in the Korean War. He was born in Indianola, Oklahoma on December 2, 1921 located in the Choctaw Nation. He will celebrate his 100th birthday next month.

My Dad Lewis DuBose, Navy Veteran
By Kyrie DuBose
My dad is so special to me. He comes home every day making someone laugh. Even though he frustrates me sometimes he always manages to make me smile. He works so hard to give us the life we have. It makes our whole family proud and happy. The thing I’m most proud of is the fact he went and fought in the Navy. I’ve looked at so many photos that he has from when he served and it looks very exciting. I’m glad he served way before I was born because I don’t know what I would have done without him home. My dad is so talkative and so friendly to everyone. When we go to Walmart he walks around and tells everyone, “Hey, How are you doing?” It’s awesome seeing him go around talking to everyone. He’s always making people smile, especially Peggy that works at Sonic here in Devine. My dad is so crazy smart too; he fixes pretty much everything that breaks at my house. My mom always says “Well at least we’re saving money because we aren’t calling a handyman!” Which is very true. Just give him some tools and it’s done in a couple hours. Again, I don’t know what I would do without him. For a guy, he gives probably the best advice on my stupid girl drama. He’s always telling me to kill them with kindness and to just not let it bother me. Even when my brother picked on me he told me “Sticks and stones may break my bones, but words will never hurt me.” He’s truly the best. I couldn’t ask for a better dad than him. I love you dad!!

SSG Lugo
By the Lugo family
Our veteran, SSG Frank Lugo proudly wore his Army uniform from 1980 – 1990. He participated in various training missions during the 10 years in the military and in his position of Track Mechanic (63Y). Frank and his wife Cris were stationed overseas (Germany) as well as stateside duty stations (Ft Bliss- El Paso) and Bismarck North Dakota.
Also, during this time, Frank and Cris welcomed their daughters, Jessica and Alyssa into this world.
We honor Frank and all other veterans who protected and served our country.