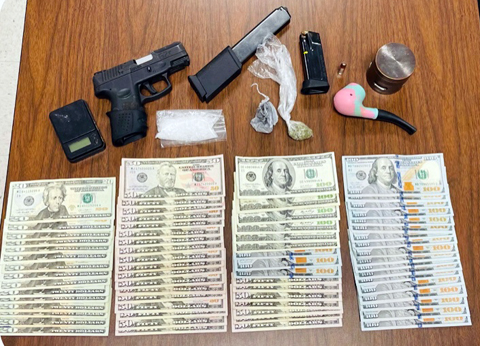 Medina County Sheriff’s Department executed a search warrant at a residence in Twin Lakes subdivision between Lytle and Natalia this past Wednesday, November 10th on CR 6850.
DPS Auto Theft unit and Border Patrol also assisted in the raid which led to a Human Smuggling arrest, stolen property, drugs, and thousands in cash. Several people were taken into custody by Border Patrol as well.
A 38-year-old male subject was arrested and booked into Medina County Jail, faced with charges of Human Smuggling, Unlawful Possession of a Firearm by Felon, Engaging in Organized Criminal Activity, and Manufacture/Delivery of Controlled Substance.
“We executed a search warrant at the suspect’s address. He has been on our radar for quite a while, and will continue to be,” Sheriff Randy Brown stated. “It’s basically what’s called a stash house. It’s a place where they hold illegal immigrants before transporting them somewhere else.”
“We seized $4,250 cash, a 9mm handgun, and approximately 31 grams of meth,” Sheriff Brown stated.
“We also recovered a stolen trailer, motorcycle, and a 4-wheeler,” he noted as they continue to investigate the case.
Sheriff noted that they also assisted in multiple pursuits of smugglers, bailouts, and arrests in the past week.
“It’s become an everyday thing,” he adds.