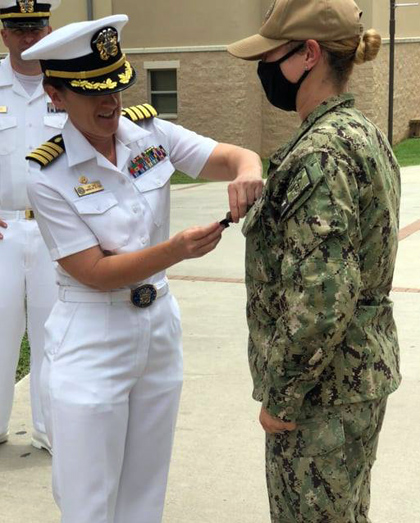 After many years of dedicated service, Nakita Atkinson of Devine was promoted to E-6. Atkinson has served for over ten years and has done some very interesting things in her career including being an actress in a Naval themed television show that featured real-life servicemen and women.
It was February 15th, 2011 that Atkinson first made the decision to serve her country. Swearing in at the military entrance processing station in Indianapolis, Indiana, Atkinson made the conscious decision not to just serve her country, but to serve her fellow man, by becoming a corpsman in the US Navy.
After going to basic training at Naval Station Great Lakes Training Center in Illinois, she ventured to Ft Sam Houston where almost all military medical personnel come to train. After being 3rd in her class at corpsman training, Nakita was given the option of a specialty, and she chose pharmacy technician. After finishing top 3 in her pharmacy school she was given choice of duty station and chose San Diego, CA. Atkinson mastered her craft at Balboa Hospital the premier Navy medical center in Southern California, where she won top honors as the blue jacket of the quarter.
After being promoted to E-4 she became a leader over sailors and inventory for the first time and was in charge of $2.1 million of medicine. After excelling in this position she was awarded her first Navy and Marine Corps Achievement Medal.

She was then called to duty aboard the USS Anchorage. With no sitting pharmacist on the ship she became the expert in medicines, compounding, reactions, and dosing for the entire crew. She was responsible for the care and well being of over 700 crew members and 2,500 different medicines on board (all while finishing her associates’ degree, and giving birth to 2 children). The ship was called to action not only in the Pacific, but also the Gulf, and the Mediterranean. While on the Anchorage she had also won sailor of the quarter two times, and had been promoted to E-5.
Nakita assisted in volunteer operations in Italy, India, and Sri Lanka. She maintained the health and well-being of the entire crew without a fatality or major incident for 8 months, while also becoming certified to do every job on the ship in an emergency, and while finishing her bachelor’s degree, and becoming a certified instructor. At the conclusion of her time afloat and while returning to San Diego, Nakita recieved her 2nd Navy Marine Accommodation Medal.
She then was hand selected to become an instructor back at Ft Sam Houston, so during a pandemic and while pregnant yet again, she moved her family and life to beautiful Devine, Texas, so that she can teach the next generation of pharmacy techs.
She began looking at the best way to help the incoming sailors going forward. So Nakita was extremely excited for the opportunity to become an instructor at Fort Sam Houston. Now, after only a year of service there, she has been promoted to E-6, a promotion that ensures her ability to retire from the US Navy at 20 years. However she is only 10 years in and has no signs of slowing down!!!!
Besides all she has done in and for the Navy, she has also been a supporting actress in a TV show called Last Ship. She has become a certified Red Cross CPR and BLS instructor, has worked with the Special Olympics, and been an advocate for women who have been sexually abused. She is also a qualified sharp shooter with two different weapons.
She is now a member of the Devine Volunteer Fire Department and is assisting in teaching others how to save lives!