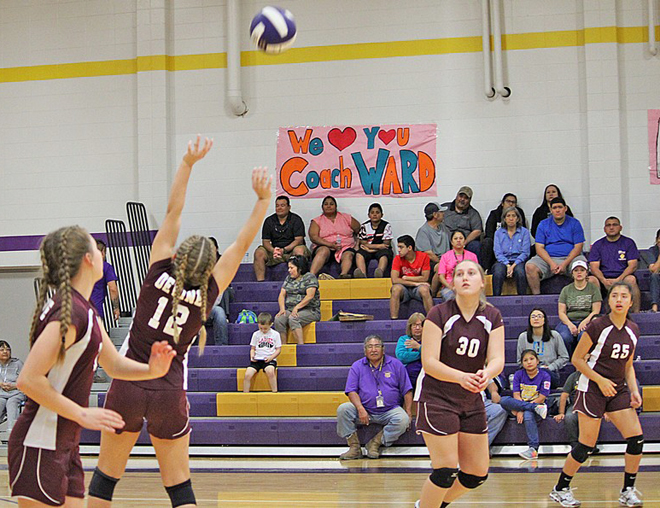 Maroon Fillys
October 14th, the 8th Grade Maroon Fillys faced Hondo for the second time this season and it took some hard work from the Fillys to earn the win in two sets at 25-20 and 25-11. Hondo made lots of changes for the second round against the Fillys. They forced us to make adjustments in the first game that, I think, caught the girls off-guard a bit. But this group is so good at making adjustments…especially when the pressure is on! So after the first game, the girls were definitely more confident with what we needed to do to get the job done, and that’s what they did! They won the second game by much larger margin. Great job Fillys!
Aces: Kaylee Romano 1, Lizbeth De Los Santos 1.Hits: Rylee Esquibel 12, Brooklyn Miller 8, Makayla Rivera 4, Macky Schnautz 3, Avery Mobley 3, Denise Contreras 1, Romano 1. Kills: Esquibel 7, Miller 3, Rivera 1, Schnautz 1. Assists: Kate Featherly 6, Kelsey Dishman 6. Blocks: Avery Mobley 1. Digs: De Los Santos 3, Yancey Parson 2, Miller 2, Dishman 1, Romano 1, Featherly 1, Rivera 1, Barnett 1, Esquibel 1, Denise Contreras 1, Mobley 1.
Gold Fillys
This game started off a little shaky at first on October 14th for the 8th Grade Gold Fillys. Hondo had the lead up until the last 3-4 minutes left of the game. After a timeout that required a little ‘butt-chewin’, the girls stepped it in gear and started playing like they are capable of playing! All I had to do was remind them of their record and asked if they really wanted Hondo to be the team that beats them…the girls were like NO!!! Then they stepped back on the court and got after it! They are true fighters! I just love ‘em! This two set win, 18-14 and 22-12, put the Gold Fillys at 7-0 for the season.
Aces: Alissa Zamora 4, Bailey Ornelas 2, Zoe Ortiz 2, Iris Stricker 1, Sabrina Lindsey 1. Hits: Reese Duncan 7, Ortiz 4, Liah Romero 3, Gabriela Mares 1, Zamora 1, Stricker 1. Kills: Duncan 2, Romero 1, Ortiz 1. Assists: Ortiz 2, Ornelas 2. Offensive serve recieve: Stricker 10, Mia Hernandez 5, Duncan 5, Alanna Monreal 3, Savannah Pequeno 1, Austin Little 1, Zamora 1. Digs: Stricker 3, Mia Hernandez 1, Zamora 1, Monreal 1.
By Coach Shana Beaty