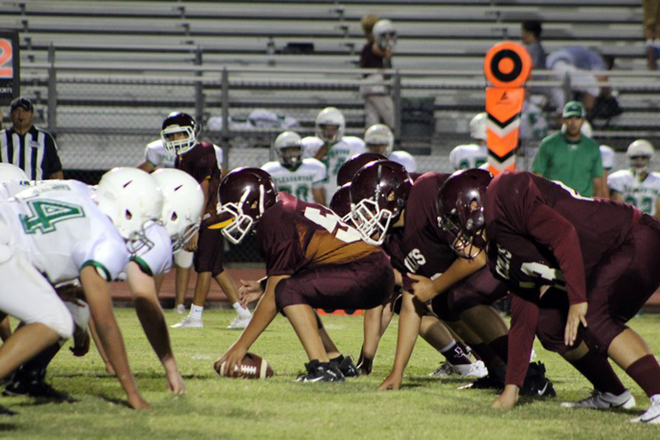 8th grade B team
September 19th, the 8th Grade Colt football team faced Pleasanton at home and lost 0-14. They will play Bandera at home tomorrow night with games starting at 4:30.
“We had to move some things around but over all these guys played tough. Our quarterback, Ace Urrea, was hurt but still played. His throwing shoulder was the problem but he still completed a pass to Quenton Sanders for positive yards. Sebastian Espinoza and Kolt Hackebeil were the only backs and played both ways without a break. We will work on getting kids into different positions and be ready for Bandera,” said Coach Lon Cozby.
8th grade A team
After a loss to SA Cornerstone last week, the 8th Grade Maroon football team was back on the field against Pleasanton. They pulled out a huge 32-14 win with Elijah Sanchez as quarterback. He fumbled the kickoff and then two plays later caught an interception.
“Ethan Santos scored from 30 yards out on the 1st play of the second quarter but it was called back on a penalty. A few plays later Ethan scored from the 6 and this one counted. He also added the 2 point conversion. Pleasanton would answer on a 32 yard pass play. Gabe Esquibel intercepted the 2pt but due to a penalty they had another chance and ran in the 2 point to tie it 8-8. Ethan would score again from the 15 and again it would be called back on a penalty. After a turnover on downs Pleasanton threw up a pass with 12 seconds left in the half that was caught and ran in for a 48 yard touchdown. Pleasanton led 14-8 at the half.
“We fixed a few things at half time and came out very aggressive. The boys were mad giving up a touchdown right at the end of the half. The Colts dominated the 2nd half with Ethan Santos 25 yard touchdown and the 2point, Dominque Valerio recovered the onside kick, Ethan Santos 20 yard touchdown, Jonathan Weinkam 2 point conversion and then Weinkam had an interception on the next drive. Sammy Guardiola found Gabe Esquibel wide open for 25 yard td pass, Luke Friesenhahn added the 2pt to make it 24 unanswerd points. Sammy Guardiola sealed of the win with a diving interception late in the end zone.
“We dominated them up front all night. Along with Adrian Gutierrez and Brandon Martinez, our line made huge running holes all night. George Saenz, Jordan Barton, Josiah Martinez, Roger Gutierrez, Corey Dirck and Adrian Beltran blocked great all night. Because of the great blocking we were able to get 8 different running backs the ball. Ethan, Gabe, Elijah, Sammy, Jonathan, Luke, Dominque, and Aaron Bonilla all had their share of rushing yards.” Coach Lon Cozby