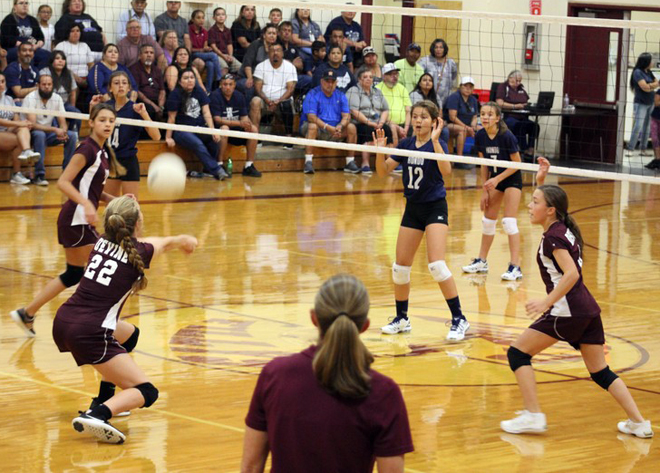 Gold
The Devine Fillys Gold Team earned a victory Monday night against the visiting Pearsall team, 25-12 and 21-15. Strong serving and consistent serving by Kyra Olson, Cassidy Garza, and Amya Polen was an important factor in the Filly’s success. Solid passing and serve receive by Alisandra Terrazas, Lynn Lawler, and Naudia Wurzback also played a huge role in the victory.
“This was a great win for this team. Earlier in the season we lost to Pearsall, so to come out successful this time shows just how far these girls have come. I am so proud of them,” said Coach Oropeza.
Kyra Olson had 10 service points, Cassidy Garza 12, and Amya Polen 6 points.
Maroon
On Monday evening, the 7th Grade Maroon Fillys took on Pearsall. In the first meeting, earlier this season, the Fillys were successful in a very close game (25-22,19-25, and 15-12). The goal this time was to win in a more convincing manner, and show themselves and everyone just how much they have improved through the course of the season.
Set 1 started off close, but as the game went on, the Fillys found their groove and began to be more dominant. Strong serving by Katie Rios (7 in a row) helped Devine pull away. Skylar Blanton recorded 2 kills with assists from Oakley Malone as the Fillys took the opening set 25-18.
Excellent defense and solid serve receive by Rios, Charlee Rangel, Anna Cale Harrison, Kourtni Geyer, and Abigail Saunders kept Pearsall’s offense in check. At the same time, strong net play by Maddie DuBose, Roxie McKee, and Skylar Blanton was vital to controlling the game. The Fillys won the second set 25-18.
“This game proved to everyone, including the girls themselves, as to just how far they have come. Our serving was solid, as was our defense. The play of our girls at the net is getting better and better. All of their hard work is really showing in their success,” said Coach Oropeza.
The final game of the season for the Fillys will be next Monday in Carrizo Springs.
Coach Julie Oropeza