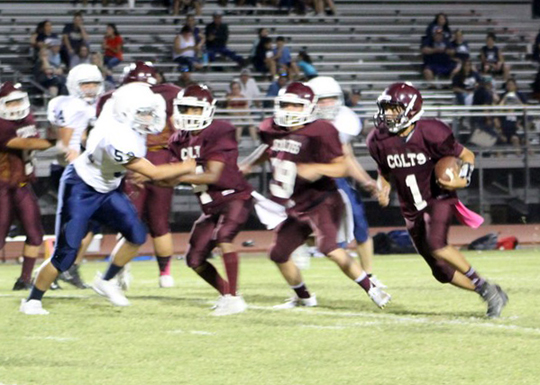 The 8th grade Colts played one game against Crystal City on October 17th and won 38-6. Led by a strong offense and a defense that could not be broken, the Colts are now 6-1. The Gold Colts have played two games this season and are 1-1.
Sammy Guardiola led the defense with 2 interceptions while Brandon Martinez added a forced fumble and recovery. Ethan Santos led the way scoring on the opening kickoff (70 yards) and adding runs of 54 and 53 yards on offense. His runs where made easy from great blocking from the line and fullback Johnathan Weinkam, who also added a 52 yard run on a nice spin move and out ran the rest of the defense.
We tried to throw the ball to add to the running game and Sammy Guardiola was able to find Derrick Razo for a 25 yard touchdown. Gabriel Esquibel, Weinkam, and Adrian Guiterrez all added 2-point conversions to pile on the points.
Ethan returning the opening kickoff really set the tone for the whole game. We had good hard blocks that led to the return and that intensity spilled over to the defensive side. We kept that energy going throughout the night. There were crystal city guys on the ground every play.
The Colts will play at home against Pearsall tomorrow night.
Coach Lon Cozby