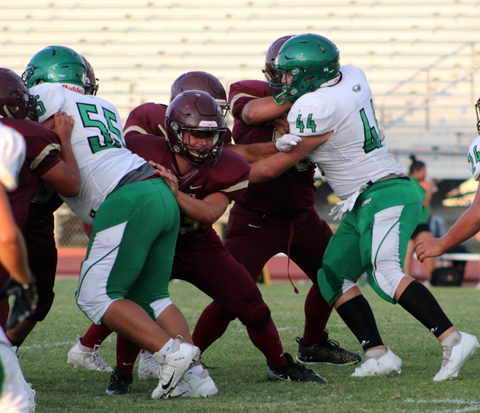 The JV Horses established their dominance early in their ballgame at Luling last Thursday. Devine scored four first-half touchdowns and converted each of the ensuing two-point conversions for a 32-0 halftime lead, before going on the 40-0 shutout victory.
Putting up those kinds of numbers makes it seem like the offense was the story of the game. However, JV offensive coordinator Coach Heath Poppe began his post-game analysis heaping praise on the team’s defensive unit.
“Our defense played amazing defense all night,” stated Poppe. “They created multiple turnovers that gave us great field position and only allowed one first down the entire game. It is evident Coach Eads did a great job preparing these men when you come up with a great defensive effort like that.”
Warhorse defensive player Charles Key forced an Eagle fumble and did the honor of recovering the loose ball as well to set up Devine’s first touchdown by Jose Moralez. Moralez ran 7-yards for the score while Evan Sanchez ran in the conversion for an 8-0 lead with 6:31 on the first quarter clock.
Devine’s defense stuffed the Eagles for one of many three-and-outs by Luling’s offense. Warhorse quarterback Jonathan Weinkam chunked a 51-yard scoring pass to Trinidad Hernandez with 3:32 to go in the first. Wero Torres added the two-points putting Devine ahead 16-0.
Defensive coordinator Evan Eads gave his unit a big pat on the back as well saying, “The defense had a near perfect game in only giving up one first down. These kids are aggressive and want to make plays. It is a joy to coach them.”
Weinkam used his legs to get the Horses their third touchdown of the opening quarter on a 14-yard run. Moralez ran in the two-point conversion making the score 24-0 with 10 seconds still to go until the second quarter.
Sanchez found the end zone for six-points with 2:46 to go before halftime. Once Torres converted the extra points, Devine went to the locker room with a more than comfortable 32-0 lead.
With the game well in hand, Poppe slowed the offensive pace as Devine scored a 4th quarter touchdown for their only touchdown in the second half. Gabriel Lopez ran in the conversion providing Devine with their final points in the 40-0 blowout victory.
“Offensively, I always give credit to the offensive linemen and tight ends when you are a running team,” Poppe said about his front seven and their often overlooked contributions to a successful running game. “They did a great job all night of making huge holes for our backs to run through considering we faced a defensive scheme every possession. The O line did a great job of just following their blocking rules and executing.”
The JV is now undefeated through five ballgames, with district beginning October 7 against Carrizo Springs at Warhorse Stadium.
“Phase 1 of the season is complete but we still have some business to tend to with winning district,” said Poppe about the team’s most important goal of the season. “It won’t be easy but if these young men continue to work and improve, we put ourselves to win that mythical gold ball!!!!”
By Jerel Beaty
Staff Writer