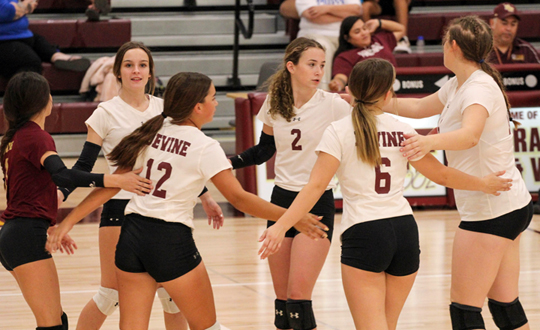 The JV Arabians ended district with a big win over SA Feast and beat Somerset in their first district game. This team is headed into district and have started it off right. The Arabians know they need to start strong and never give up no matter the score.
Playing SA Feast on Tuesday, Feast took the first set but just made the Arabians more aggressive. Devine took the second set 25-13 and the third 25-21 to win the game. “These girls did a great job of keeping calm and really taking control of the second set. The first set was back and forth and we just couldn’t finish offensively at the end. But the rest of the match was a different story. The girls pulled it together on the offensive side and really limited their errors while making some great plays on the defensive side. This win was a total team effort,” said Coach Leigh Anne McIver.
Karsyn Brown 5 digs, 1 assist, 1 ace, 3 kills, 1 block. Neenah Guerrero 6 digs, 1 assist, 2 aces. Kaylee Romano 3 digs, 1 ace, 1 kill. Kate Featherly 4 digs, 2 aces, 8 assists, 3 kills. Makayla Rivera 2 digs, 1 kill. Kelsey Dishman 8 digs, 8 assists, 3 kills, 1 block. Avery Cruz 3 kills. 4 blocks. Maddie DuBose 4 kills, 2 blocks. Yaya Rodriguez 1 dig.
In their district opener, Devine expected to face a tough opponent. Somerset was unable to keep up and they fell 25-11 and 25-12. “The girls did a great job tonight of really controlling the game. We started off a little slow in the second set but stepped it up and started taking care of the ball and earning points. We make some great defensive plays that kept us in the rallies and were able to finish the points with our offense,” said Coach McIver.
Brown 7 digs, 2 aces, 4 kills. Guerrero 4 digs, 1 assist, 2 aces, 2 kills. Romano 3 digs. Featherly 1 dig, 2 assists, 2 kills. Rivera 1 dig, 1 kill. Dishman 5 digs, 11 assists, 4 aces, 1 kill. Cruz 4 kills. DuBose 1 kill, 1 block.
Devine had a bye last night and will take on Young Women’s Leadership Academy on October 1st and Brooks Academy on October 4th.
By Dicy Chambers
Sports Writer