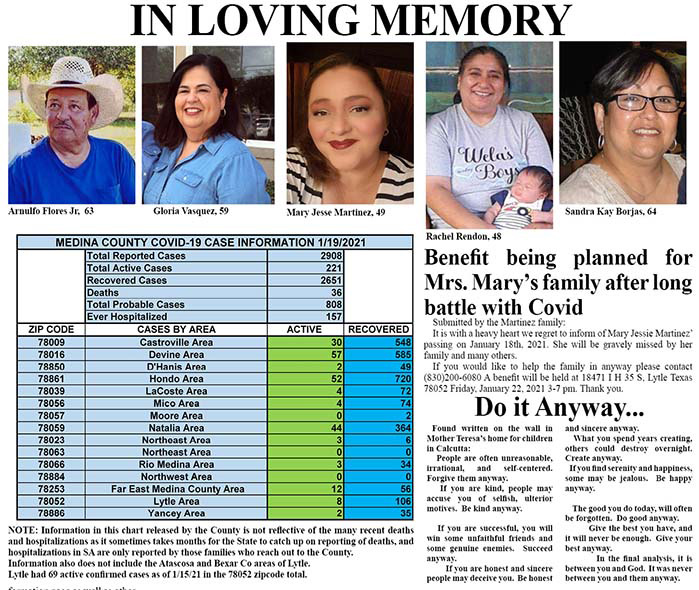 The total number of Covid cases increased by 221 in the past week from Tuesday, January 12 to Tuesday, January 19. There were also 221 active Covid-19 cases reported in Medina County as of press day, Tuesday, January 19th.
We have been informed by family members of six local people who have sadly passed away from this terrible virus this January, including Gloria Vasquez 59 (of Natalia), Mary Jesse Martinez 49 (of Lytle), Arnulfo Flores 63 (of Lytle), Rachel Rendon 48 (of Devine), and Sandra Kay Borjas 64 (of Devine). We are also aware of several who are hospitalized.
While 134 people in Medina County were moved into the recovered category on January 19th (due to it being 14 days since testing), an additional 87 new Covid cases have been reported on the same day.
All cases are moved into the recovered category when they have tested positive at least 14 days prior. An active case is defined as one who tested positive in the past 14 days, but because of the delay in information, most cases will not appear as active on the chart for 14 days.
Most of the recent hospitalizations and tragic deaths of local people that are occurring in San Antonio are also not reflected in the charts because of the delay in information provided by the State.
UPDATE: As of the time this article was uploaded online, the active case count was down to 202, although 24 new cases have been reported today on January 20th. (43 cases were also transferred to the recovered category simultaneously).