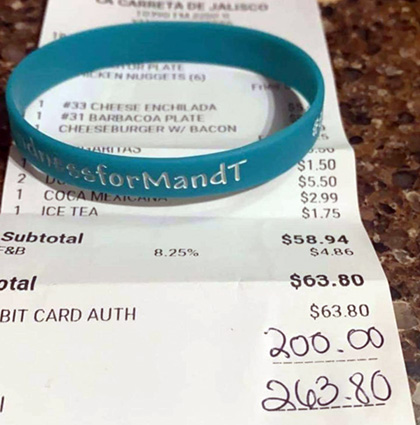 A local waitress in Yancey, TX was both surprised and shocked as a local woman presented her with a $200 tip this past week! This random act of kindness was done in honor of two beautiful angels, Madison and Tanner McCleary. It is one of dozens of kind acts that have been done in their name.
“M and T” lost their lives in a tragic car accident on their way to school between Charlotte and Jourdanton on January 18, 2017. On the “Angelversary” of that very dark day, their Atascosa County family started the #spreadkindnessforMandT movement, where they have asked for everyone to Spread acts of kindness in honor of their two beautiful angels.

Local Natalia CC Coach Kim Lane, who presented the tip, was coaching in Jourdanton the year that the terrible accident happened and was inspired to see so many acts of kindness to their name. This year, she wanted to do something extra special, and extra special it was!
“Their parents Kevin and Audrey were strong, persevered, and loved through the darkest time of their life. This year, I put out a Facebook post with the idea of giving a local waitress a really nice tip on the Angelversary of Madison and Tanner. I had some amazing people donate!” Lane said.
“Donors gave anything from a few dollars up to 50 dollars. In total I had close to $200 to bless someone with. We went to La Carreta de Jalisco Restaurant in Yancey, and at the end of dinner when I went to pay, I added the $200 tip in,” Lane adds.
“I explained to her that I was just the messenger, passing along the kindness. I wrote down some information about them and handed it to her along with the M and T bracelet. She was very happy and a little shocked. I was quiet and quick as to not make a scene. But I knew we had made Madison and Tanner proud.”
Be part of this project!
Perform an act of kindness this week, and share it with the family on Audrey Young McCleary’s page and our Devine News page.
By Kayleen Holder
Editor