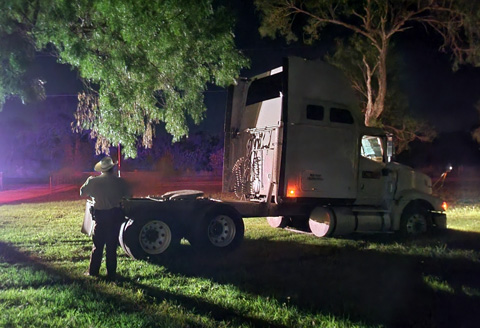 Lytle area homeowners were relaxing at home when they heard a vehicle pull up in the driveway. It happened Saturday night around 9:00 p.m. on Boxhouse Road off of FM 3175 near Lytle. After noticing it was an 18 wheeler cab sitting in the middle of their yard and seeing someone walking around, the homeowners made contact with the individual.
The individual stated he was coming from Laredo and asked “if this was the ranch where he is supposed to be at.”

The homeowner said no and seconds later, a black SUV pulled into the property. Sensing something wasn’t right, he told them to get off of the property. The 18 wheeler became stuck, and as many as 20 people piled out of the 18 wheeler sleeper area of the cab and scattered, along with the driver of the 18 wheeler.
Atascosa County Sheriff David Soward stated, “The smuggling of Illegal through Atascosa County has started to pick up more and more the last several days.”
In reference to this incident, he stated, “The caller observed 15 to 20 subjects exited the truck and fled on foot into the wooded area nearby. Deputies responded quickly to the area, backed up by Lytle Police. Deputies encountered a black Tahoe and a white Suburban that were connected to the incident. The black Tahoe attempted to flee from Deputies and quickly crashed. Two subjects were taken into custody including the driver of the SUV and a suspected Illegal Immigrant.”
“Deputies seized approximately $4,000 cash, the truck-tractor and the black Tahoe in connection with Human Smuggling. The driver was booked into the Atascosa County Jail charged with Evading Arrest. The second Illegal immigrant was turned over to U.S. Border Patrol.”
The Illegal immigrants that fled from the 18 wheeler sleeper were not located, according to sheriff.
“We are not seeing what some counties south and west of us, but our activity is picking up, we have at least one encounter a day. It’s obviously a problem, and tying up resources,” said Atascosa County Sheriff David Soward. “BP will pick them up, but they are getting released because the US Attorney is not even accepting the cases of the drivers to be charged federally with smuggling. It’s a never ending cycle. It’s not going to get better with current policies.”
The arrest made was a 33-year-old male subject, and he is charged with Evading Arrest with Motor Vehicle-Felony.

Sheriff Brown says trains are one of biggest transporters
“The trains have been one of our biggest problems with illegal immigrants. Medina County has a train track that runs east to west and north to south. I don’t know where they are boarding, but they are boarding and hiding all over the trains. I had about 40 people get off trains and come across my back field a couple months ago,” Sheriff Brown said.
“In the past week, I’d say we’ve had come across about 25 illegal immigrants in Medina County, and probably captured half of that. We are trying to monitor trains as we hear them stopping and check them at that point. San Antonio is a magnet, so they are trying to get there.”
Sheriff estimates that the many pursuits and searches consume about “Half a day every day. We need to quit trying to hold the border from miles away, and hold the border at the border. That’s what I think.”
“This is the worst it’s ever been. Anyone from Hwy 90 south can tell you that. There’s nothing to even compare it with,” Sheriff Brown said. “The BP’s statement is “Don’t Come. Don’t come.”
US Border Patrol reported between 7,000-9,000 “encounters” per month in the Laredo sector this past October, November, December, January, and February. In March, over 11,000 encounters were reported in the Laredo sector and 10,900 encounters in April. A total of 64,500 encounters were reported by USBP in the Laredo sector from Oct-April.
The Office of Field Operations reported another 5,100 encounters from Oct-April in the Laredo sector, with about 600 encounters per month in October, November, December, January and February, and over 900 encounters this March and April.
Encounters are up 170% in the Laredo sector.