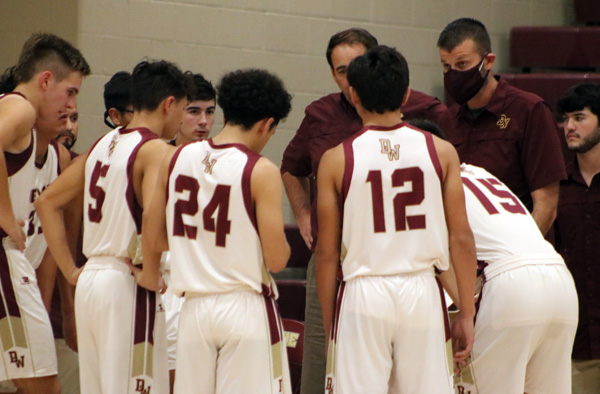 With only one game last week, the Warhorses took on YMLA on Friday night. Now 0-2 in district, Devine still has five district games left to improve their standings. They faced Brooks Academy last night and will play Fox Tech at home this Friday.
Friday night in front of their home crowd, the Warhorses took on YMLA. The first quarter began with senior #25 Peyton Carr rebounding the ball and making a quick pass to junior #4 Caden Hanson. Hanson then took the ball to the basket and scored a right handed layup, making the first point of the game. Directly after, senior #3 Sage Cruz rebounded the ball and passed to Carr, who made a block shot and added two more points to the board. Senior #33 Xavier Contreras had many great plays offensively and defensively. Throughout the game he had several rebounds, baskets, and assists. A few minutes into the first quarter Cruz stuffed a YMLA athlete going up for a layup and ignited the gym. Cruz had multiple rebounds as well. Late in the second quarter Hanson made his first three of the night making the score 21-40 at the end of the first half.
In the second half Contreras, Carr, Morin, and Cruz all worked to put some points on the board. Carr made several jump shots along with multiple rebounds. Sage Cruz had a steal and drove for a layup. Contreras had multiple rebounds, jump shots, and steals. Sophomore Jordan Roberts was recently moved up and had many rebounds and several jump shots last Friday night as well. Late in the fourth quarter senior #5 Isaiah Morin made his first three of the night and made the stands go wild. The Warhorses put up a good fight, but unfortunately fell to the quicker YMLA team.
“YMLA did a good job pressuring our guards and preventing us from executing our offense. We did not force YMLA into enough half court sets. We allowed too many fast break opportunities for them,” added Coach Evan Eads.
Stats: Cruz 2 points, 5 rebounds, 3 steals. Hanson 9 points, 5 rebounds, 3 assists, 1 steal. Morin 5 points, 3 rebounds, 2 assists, 2 steals. X. Contreras 13 points, 7 rebounds, 3 assists. Carr 5 points, 7 rebounds, 1 assist, 2 steals. Roberts 2 points, 2 rebounds, 1 steal, 1 charge. Eli Contreras 2 rebounds, 1 steal. Q1 11-26, Q2 21-40, Q3 27-62, Q4 36-71. FTP 43%.
The Horses will play Fox Tech here at home next Friday on January 28 at 5 and 6. Make sure to come support the Warhorses and get loud!
Dicy Chambers/Amber DuBose