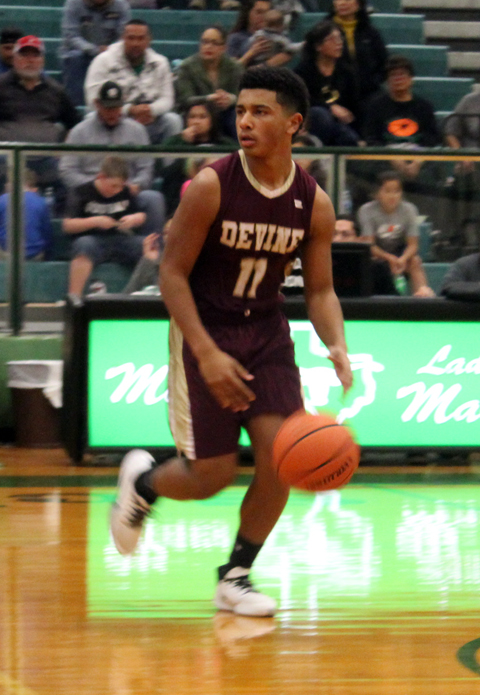 The Warhorses are now 4-0 in district after beating Hondo and Carrizo Springs. They played Crystal City on the road last night and will play Pearsall at home Friday.
Hondo did not go down easy on January 28th; the Warhorses had to work hard to beat them in the last moments of the fourth. Trailing 13-14 at the end of the first, Kam Adams and Mason Burford stepped up to lead the scoring with 5 points each in the second. The Warhorses lead 28-25 at the half. The Owls would not go away and outscored Devine 12-16 in the third. Justin Contreras and Adams each had 7 points in the fourth and Burford sank a three pointer and free throw. The Warhorses won 58-56. “Great game, great atmosphere. Kids played extremely hard and made big plays when we needed it.” Coach Paul Wells
Dalton Kramer 4, Sergio Martinez 5, Burford 14, Adams 20, Contreras 15. Q1 13-14, Q2 28-25, Q3 40-41, Q4 58-56. FTP 65%.
Friday night against Carrizo Springs was a different ball game. Carrizo was not as aggressive as the Owls and the Warhorses had a chance to work on their overall game and continue to break Carrizo Springs defense. Leading 12-4 at the end of the first, the Warhorses continued strong into the second to finish the half 20-10. The third and fourth quarters were much the same, with Devine controlling the tempo of the game and Carrizo Springs trying anything they could to get to the basket. The Warhorse defense stopped nearly all of their drives, ending the game 65-30.
Kramer 4, Jose Dozel 3, Martinez 6, Burford 12, Adams 15, Contreras 11, Colin Dishman 2, Xavier Contreras 2. Q1 12-4, Q2 20-10, Q3 33-17, Q4 65-30. FTP 67%.
By Dicy Chambers
Sports Writer