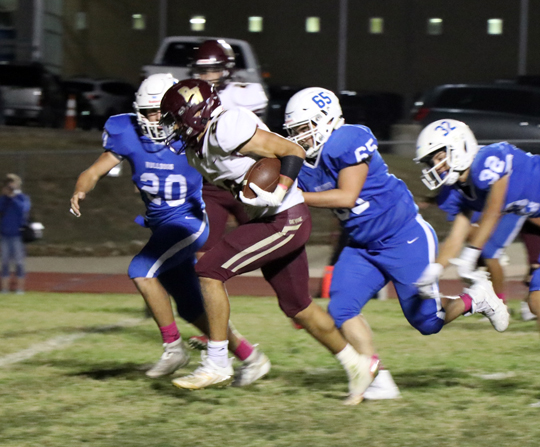 Aces
The Warhorses 63-0 smacking of the Bulldogs put the Devine scoring tally for all football games played against Bandera at 193 to zero.
I am not sure if there is such thing as a mercy rule in 11-man football as there is in 6-man football but this would have been the perfect opportunity to institute such a rule.
The 7th grade Gold Colts got things started with a 12-0 dinking Thursday in Bandera followed by a 7th grade Maroon 40-0 thumping, and an 8th grade 30-0 pounding.
In Devine on Thursday, the Warhorse JV shut down the Bulldogs 48-0.
All Devine teams simply overpowered each Bulldog team. The Bulldogs could not successfully defend anything that a Colt or Warhorse team threw at them.
I am not a betting man but if the opportunity presents itself to throw a little friendly wager on the Horses against the Bulldogs over the next five years, definitely take that person up on the bet.
Game, set, no match
Twenty-seven to zero after the first quarter put this victory to rest early for the Warhorses and showed Bandera was going to be no match for Devine’s resolve. Touchdown runs by Buddy Santos, Brady Hackebeil (who had two), and Justin Contreras and the Warhorse defense forcing three punts and a turnover in the first quarter set the stage for the lopsided victory.
Volley, spike
After picking up a first down on their opening drive, the Bulldogs were forced to punt. Devine took over on the Bandera 48 yard line. One play and 14 seconds of action later, Buddy Santos scored the first of nine Warhorse touchdowns on the evening.
Bandera punted five times and committed three fumbles giving the Warhorses multiple opportunities to put points on the board.
Dig it
Devine’s Xavier Contreras forced a Bulldog fumble that teammate Christian Gerlach recovered with a little over a minute to go in the first quarter. Brady Hackebeil wasted no time busting loose for his second TD of the night, this one from 53 yards out.
With that run, Hackebeil had already surpassed the 100-yard rushing mark with more than three-quarter of the game remaining.
In the third quarter, Robert Ramirez stripped a Bulldog back forcing fumble #2. Gabriel Esquibel quickly jumped on the ‘campfire’ loose ball to set up Nate Ramirez’s 17-yard scamper seven plays later.
Ethan Santos ripped the ball away from a Bandera runner late in the fourth quarter to not only get credit for a forced fumble, but a fumble recovery as well. Devine did not necessarily need to put more points on the board and took the victory kneel multiple times to not rub salt in the Bulldogs open wound.
Foot fault
Scoring a safety is not your typical every game occurrence however after Devine punted for its first and only time of the game in the early stages of the second quarter, Bandera’s quarterback took a big loss running out of bounds at the Bulldog one-yard line.
Forced to punt for the fourth time, Bandera’s punter took the long snap near the back line of the end zone and simply stepped out of bounds to give the Warhorses two point safety.
Team stats
First downs Dev 17 Ban 5 Total yards Dev 559 Ban 51 Rushes-yards-avg Dev 35-542-15.49 Ban 37-51-1.38 Passing Dev 2-4-17 Ban 0-4-0 Fumbles-lost Dev 0-0 Ban 3-3 Penalties-yards Dev 6-60 Ban 3-20
Warhorse stats
Rushing Brady Hackebeil 5-182 (36.4), 2 TDs; Hayden DuBose 5-145 (29.0), 2 TDs; Buddy Santos 6-126 (21.0); 2 TDs; Marcus Rodriguez 7-52 (7.4), 1 TD; Justin Contreras 4-18 (4.5), 1 TD; Ethan Santos 1-14; Aiden Zapata 2-4 (2.0); Gus Puente 1-2; Nate Ramirez 3-1 (-0.3); Sam Guardiola 1- -2 Passing Hackebeil 2-4-17 Receiving Mason Burford 2-17 (8.5).
Scoring summary
DEV—Buddy Santos 48-yard run (PAT failed), 6-0, 8:31, 1st.
DEV—Brady Hackebeil 78-yard run (B. Santos conversion run), 14-0, 5:32, 1st.
DEV—Justin Contreras 9-yard run (Xsavior Martinez PAT), 21-0, 1:50, 1st.
DEV—Hackebeil 53-yard run (PAT failed), 27-0, 0:33, 1st.
DEV—Safety, 29-0, 9:07, 2nd.
DEV—B. Santos 24-yard run (Martinez PAT), 36-0, 5:56, 2nd.
DEV—Marcus Rodriguez 9-yard run (Martinez PAT), 43-0, 0:20, 2nd.
DEV—Hayden DuBose 55-yard run (Martinez PAT), 50-0, 11:17, 3rd.
DEV—Nate Ramirez 17-yard run (Martinez PAT), 57-0, 4:18, 3rd.
DEV—DuBose 78-yard run (conversion pass failed), 63-0, 6:33, 4th.
By Jerel Beaty
Staff Writer