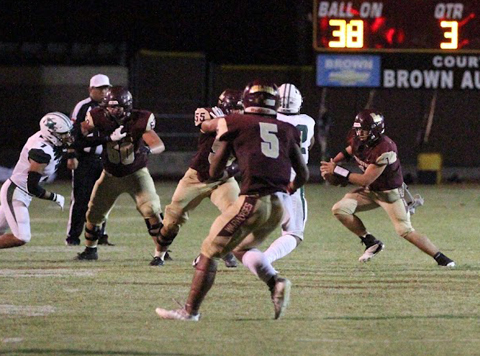 For those taking in Warhorse football games either in person or watching on the tube while listening to Jimbo and Schmidty calling the action, now that we have reached the midpoint of the season one thing has become perfectly clear is Devine can and will dominate a game by running the football.
Andy Zapata and James Ornelas, the excellent and dedicated sideline stat recorders, show the Horses have a whopping 1,772 yards on 243 attempts for an average of 7.1 yards per carry through five ballgames. Ten different players have run the ball, while eight backs have combined for 26 touchdowns.
Ten man
Xavier Contreras leads the charge with 40 carries for 413 yards. His 10.3 yards per carry was boosted by a Warhorse record 99-yard touchdown run against YMLA. Contreras has four touchdowns.
Quarterback Brady Hackebeil gets many of his running attempts after reading a defensive player to see if it is a ‘give’ or ‘take’ for him. Hackebeil’s 350 yards on 46 attempts is good for 7.6 per carry and four touchdown runs.
Ethan Santos has carried 31 times for 254 yards, which is good for 8.2 yards each time he runs the ball. He also has six touchdowns.
Gabriel Esquibel leads the Warhorses with seven rushing touchdowns through five games. He has run 39 times for 230 yards, good for 5.9 per carry.
Marcus Rodriguez has made the most of his attempts from the fullback position, a position not known for getting just a whole lot of carries in this particular offense. Rodriguez has 19 carries for 164 yards (8.6) and two touchdowns.
Aiden Zapata averages 9.0 yards per carry, which is second on the team behind Contreras. Zapata has 13 rushes for 117 yards and one touchdown.
Hayden DuBose has 71 yards on 22 attempts (3.2) and one touchdown.
Gus Puente also has 71 yards, getting his on 16 rushing attempts (4.4). Puente has one touchdown.
Nate Ramirez is next with 16 rushes for 56 yards (3.5).
Backup quarterback Samuel Guardiola has rushed 8 times for 46 yards (7.7).
I know it is too late to make a long tidbit short, but by looking at the numbers these ten backs have produced makes it extremely difficult for opposing teams to key on a single back to stop from week to week.
If the Horses can keep sharing the ball like they proved they could in the first half of the season, they will be a team to reckon with in District 15-4A DII and into the state playoffs.
In passing
A year ago, Devine threw for 957 yards in 11 games. Those figures are going to be tough to reach this season, but with the running game leading the way it may not be essential to capturing a district or bi-district championship.
Brady Hackebeil was the number one quarterback a year ago just as he is this season. He accounted for 842 yards and 12 touchdowns in 2020.
This season, Hackebeil has completed 18 of 39 passes for 311 yards and three touchdowns.
Devine does not seem to have that true number one receiving threat, but ten different receivers have been on the end of a Hackebeil pass. Each of the eight running backs listed above have at least one reception, and Peyton Carr has added two of his own including a touchdown reception in Week 1.
What’s the point
Devine has tallied 195 points through five games, good for a 39 points-per-game average while only surrendering 103 (20.6). The Horses scored a season-high 63 points in Week 3 against YMLA, 57 in their season-opening rout of San Antonio Highlands, and 44 in a Week 2 victory over San Antonio Memorial.
Although the Horses ‘only’ scored 19 points in their last victory against Luling, that came in a shutout homecoming victory. Devine scored 12 points against Pleasanton, their only loss so far this season.
Penalty box
If there was a drawback to Devine’s 4-1 start, it would have to be the number of penalties committed through their first four games. Thirty-eight times the Horses a penalty was enforced, moving the down marker for a misleading 292 yards.
The 292 is ‘misleading’ due to the fact the Horses had more than a handful of long runs or returns nullified to the dirty laundry thrown on the field. The penalty yards do not reflect the what-could-have-beens of several good Warhorse rush or pass plays.
The bright spot going into the second half is that only two flags were thrown against Devine in their last game versus Luling, costing them only 20 yards.
Hopefully some of the early season infractions are a thing of the past and the Horses can continue gaining big chunks of yardage without any flags being thrown to their detriment.
By Jerel Beaty
Staff Writer