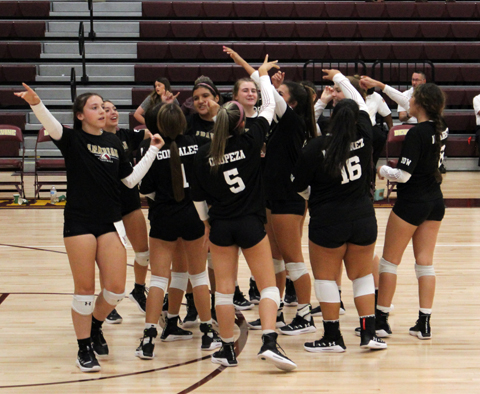 The Arabians took on Young Women’s Leadership Academy last week and it was a tough game for both teams. Devine won in five sets at 25-19, 25-9, 29-31, 25-27 and 15-12. Devine will take YWLA on again on October 19th in Devine. This puts the Arabians at 2-0 for district and 19-13 overall.
“This was a big game for us because the district championship is going to be between us and YWLA. We really took control in the first 2 sets and really limited what YWLA was able to do on their side of the court. We were serving really well and they were unable to run their offense off their passes. But in the 3rd and 4th set we lost our focus and opened the door for YWLA. Their offense got going and we were unable to pick up some of their attacks. The girls got refocused in the 5th and were able to close the set out. Many lessons were learned in this game that will come back and help us in playoffs. When YWLA comes to Devine it will be an intense game and will most likely be for the district championship,” said Coach Leigh Anne McIver.
Zoe Gonzalez 1 kill. Avery Cruz 3 aces, 26 digs, 6 assists. Rylee Esquibel 20 kills, 5 aces, 18 digs. Kristina Moralez 13 digs. Bailey Oropeza 1 ace, 12 digs. Brooklyn Miller 10 kills, 2 digs. Macey Hein 4 kills, 2 aces, 2 blocks, 10 digs, 49 digs. Brianna Torres 5 kills, 1 block, 1 dig. Aleyna Gerlach 8 kills, 2 blocks, 3 digs. Skylar Blanton 9 kills. Cece Martinez 6 aces, 4 digs.
By Dicy Chambers
Sports Writer