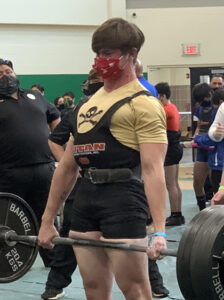 Making it to State is no easy task for any athlete, and Lytle is proud of Rylan Wagner. He competed in Abilene, March 26-28.
“He competed well yet fell a bit short of where he would have liked. Wagner managed to Squat 500 pounds, Bench 365 and Deadlift 525 pounds for a combined total of 1390 pounds and bragging rights to being one of the top 10 best lifters in the entire State of Texas in the 181-pound weight class,” said Coach Ric Richmond.
Congratulates to this Pirate on all he accomplished this season.
By Dicy Chambers
Sports Writer