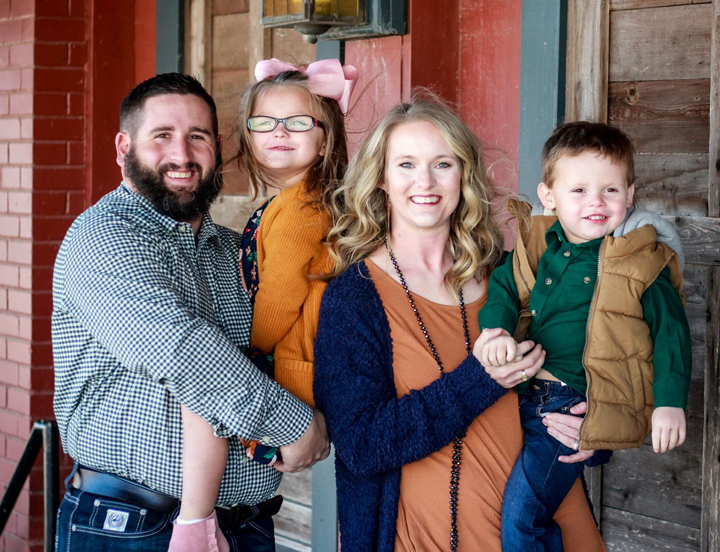 When the Campseys first met their little angels, Emerie and Levy (now 4 and 3 years old), neither child could talk, neither could run around and play like other children their age because they were so physically weak, and both were facing significant developmental delays. They had spent a month in foster care and had been moved around to many different homes already, but when they finally found the love that they’d been missing–it made all the difference in the world. And they found that love in the home of adoptive parents Jenah and Jacob Campsey. Jacob is a Devine native, and now lives with his wife Jenah, teaching and coaching in Rockdale, Texas.
Their story will bring you to tears in the beginning, but put a big smile on your face before you finish. We hope that by sharing this story, we can show the miracle of what a loving home has done for these two children, and what a loving home can do for so many other beautiful foster children, just like Emerie and Levy, who have faced such unimaginable, scary, and difficult circumstances in their lives. After just a few months of love and care, both children are thriving…. jumping and playing and skipping and running in a way that amazes everyone.

“I have seen it with Emerie and Levy. Levy went from being withdrawn, scared of everyone, unable to crawl– to being a happy kid who runs to the door to greet you. Emerie came to us not being able to talk, or even say her name, and now she is speaking in complete sentences and reading and on an above average reading level. She went from being terrified of all men to being the biggest daddy’s girl there is.”
“I have seen it happen, and it has been such a rewarding experience. I would never consider Emerie or Levy lucky, with all that they have been through, but I consider me and Jacob very lucky, for getting to love them.”
The Campseys fostered Emerie and Levy for a year and half before they were able to make it permanent, and now they are free to just be kids! No more CPS visits or court dates….just lots of love and play dates.
“There were a lot of good days and some bad days, but their love for us and ours for them was undeniable. The kids closed a lot of gaps with a lot of hard work from themselves, us, and our village of people who have stood beside us in this journey,” the Campseys said.
It was December 5, 2019, when Emerie and Levy walked into the courtroom with their foster parents and officially became Campseys.
“It was truly the greatest day of our lives,” the Campseys said. “The kids are as proud of it as we are. It has been a ride with many ups and downs but far more ups. We wouldn’t trade this journey for the world. And even though we have never met their biological parents they hold a special piece of our hearts. We love them and pray for them daily. They are who made us parents. The privilege of raising them is not lost on us. We know this didn’t come without a loss of their biological family.”
After seeing and knowing the love of these two children, who spent 647 days in foster care, it’s hard not to think about all of the 20,000+ children who are still in foster care right now, just waiting for a family.
“We all have a place in caring for our children in care of the State. If you can’t adopt: foster. If you can’t foster: sponsor. If you can’t sponsor: volunteer. If you can’t volunteer: donate. If you can’t donate: educate,” the Campseys said.”There is never a good time to do it. We could have made a thousand excuses as to why we didn’t want to do foster care, but I promise you if you choose to, you will be blessed. We are not heroes, we are just two average people who felt the call to help.”
When it comes to advice, Jenah encourages others to do your research when picking out an adoption agency.
“There are good ones, and there are bad ones, but it’s important to have an agency, because they will help advocate for you.”
She also assures those who have heard the myths about adoption costing a fortune—that “Our adoption did not cost us anything. We contacted an agency (A World For Children) who contracts with CPS, and CPS took care of all the attorneys fees, and even sends subsidies to help with the various costs of caring for the kids. They will receive medical coverage until they are 18, and free college tuition as well.”