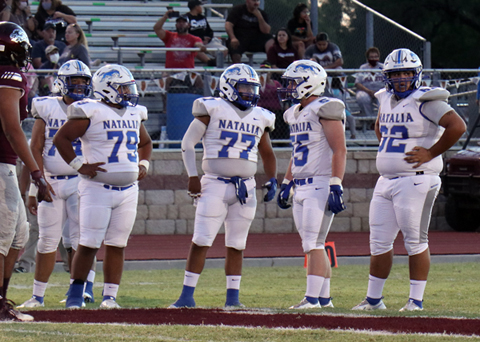 The Natalia Mustang offense wasted no time in Frio County last Friday night to set the tone. With a drought at Gosch Field dating back to 1989, the Mustangs knew the time was now. Natalia received to start the game and needed just three plays to strike first, as QB Ryan Rizo connected with Gabriel Perez on one of two touchdown passes to put the Stangs on the board with 10:35 to go in the opening quarter. This was one of six first half strikes which fueled Natalia behind a solid defensive effort to a 46-0 shut-out road win.
“It is always good to get the win, but to open district play on the road and do something that hasn’t been done in a long time made that victory that much more special,” Coach Ilyan Martinez said. “I was really proud of how our kids and coaches approached the game. It was a business trip and they handled themselves as such.”
A business trip it was, as the Stangs dominated in all aspects of the game. Natalia finished the game with un-official stats of 369 yards of offense compared to 41 yards of offense for the Wolves. One of the stats that stood out the most, was the command in which Natalia had finishing with 26 1st downs compared to 5 by Dilley as the Natalia defense forced two turnovers as well.
Following the opening score by Natalia, Dilley’s offense struggled to get anything going and they punted after 3 straight plays that gained 0 overall yards.
Natalia got the ball back at the Dilley 49 yard line and used seven plays to march down field 51 yards. Natalia used runs by Nate Banda, QB Rizo and RB Adrian Vasquez before back-to-back incomplete passes set up a 3rd down and 10 at the Dilley 16 yard line with 7:40 to go in the 1st quarter. Rizo rolled around and made things happen with his feet, before he fired to Nate Banda in the end zone who made a nice grab for the second Natalia touchdown. The two point try failed, but Natalia’s lead was 12-0.
On the ensuing Dilley possession, the Natalia defense continued to do what they did all night and that was dominate. A total of fourteen different Mustangs had either tackles or assists during the game which proved to be a true team effort. They forced another Dilley punt on their second possession and it rolled to the Natalia 19 yard line.
During the third drive, Rizo made impressive connections to Manuel Garcia and Gabriel Perez before they also used runs by Rizo and Elijah Banda to move down field quickly. With 3:20 to go in the 1st quarter, Rizo found Gabriel Perez for a 12 yard strike and the third Natalia touchdown of the game. The PAT by Garcia was up and good, as the boys in blue had built a 19-0 lead.
Things continued to go Natalia’s way as A. Vasquez was able to intercept a Dilley pass on their second play of their third drive. Vasquez returned it to the Dilley 41 yard line where the offense went back to work. One Rizo run and four straight by Vasquez and Natalia was set up with 3rd and goal at the Dilley 2 yard line. QB Rizo bulled his way through and walked in for the Natalia touchdown with 59 seconds to go in the opening quarter. The PAT was good, as Natalia had opened a 26-0 lead on IH-35 Rival Dilley and their packed home-side was simply stunned as the Wolves had come in 4-0 on the season.
Natalia put a statement play on the 4th drive by the Wolves as the impressive defense continued forcing the 4th punt in a row for Dilley. Dilley attempted to punt from their own 18 yard line, but David Silva barreled through and blocked the punt, sacking the punter back at their own 1 yard line. One play later, the Mustang faithful were loving it as E. Banda bulled in from 1 yard out to give the Stangs a commanding 33-0 lead with 10:23 to go in the 1st half.

Natalia’s final strike of the first half came with 1:06 to go in the first half. Natalia used a nice and lengthy 13 play, 77 yard drive that took over 5 minutes off the clock to put the dagger in the Wolves. Natalia’s Rizo ran in from 2 yards out, to give Natalia their 6th touchdown of the first half, as a Garcia PAT allowed the Stangs to take a 40-0 lead into the locker-room at the half.
In the second half, the clock ran the entire half as Natalia put things on cruise control. Natalia added one final touchdown as Ryan Rizo connected with Vasquez for a 9 yard strike with :04 seconds to go in the 3rd quarter of action. The PAT failed, but Natalia took a 46-0 lead and never looked back en route to a dominating district opening win.
Offensive Execution
The Mustangs ran 53 total plays to account for their 369 yards of offense which included another impressive performance by QB Rizo. He finished the day with 11-15-162-4TDs as the offense rushed 37 times for 207 yards with 0 total turnovers. Receiving wise, G.Perez had 3-73-2TDs as A. Vasquez had 3-40-1TD and Garcia 2-26.Vasquez led the ground attack with 10 carries for 71 yards as E. Banda had 8-39-1TD, Luis Buentello 5-35 and N. Banda 4-34. A total of ten Mustangs contributed with touches throughout the night which continued to show the un-selfish and multi-talented approach this 2021 team has to work with.
“I felt our offense had another strong performance,” Martinez said.”We are starting to get all of our guys back and I feel like we are close to being where we need to be full throttle on offense. Our guys are doing a great job of being efficient and taking what the defense gives us. They never try to do too much and play within themselves and that has allowed us to get better each week.”
Defensive excellence
Anytime you can hold a second straight team under 50 yards of offense, you are doing something right and this is just what Natalia did to a previously undefeated Dilley squad.
“It was another good performance by our defense,” Martinez said. “Anytime you hold any team much less a district opponent under 100 yards, that is pretty special. They are playing with a lot of confidence and that has been a huge reason for our success on Friday nights.”
Defensive Stat Leaders: Tackles – Christopher Saldana 7, Devin Perez 7, Garcia 5, Paul Zapata 4, E. Banda 3. Assists – Austin Sutton 6, N. Banda 4, E. Banda 4, A. Vasquez 4, D. Perez 3. Tackles for a loss – D. Perez 7.
Final Thoughts from Coach
“I have played in a lot of games in Dilley and at the other end of those games, so I am really happy and proud for our community,” Martinez said. “Our fans showed up in full force and our boys did what they had to do to end that streak. I am just grateful I was able to be a part of it.”
The last team to defeated Dilley was the 1989 undefeated Natalia Mustangs who won District which happens to be the last district title for the boys in blue.
Upcoming Game
The Natalia Mustangs welcome Stockdale to town Friday for a big district showdown at Mustang Stadium. See the preview article for more details.
By Eric Smith
Staff Writer