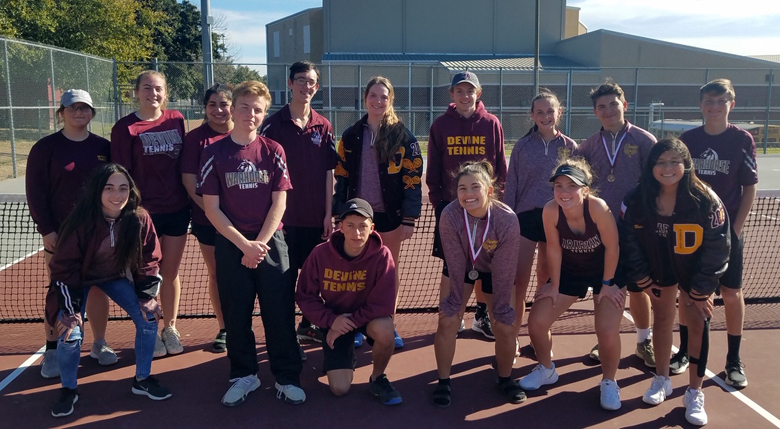 The Arabian and Warhorse Tennis Team placed 3rd out of 16 teams in the 41st Uvalde Varsity Invitational last week over a two day tournament.
Brooke Runyan had a very impressive tournament. Runyan won a tie breaker in her first match to defeat a salty Jazzimine Gil from Laredo United South. Then she defeated girls from Del Rio, Hondo, and Warren HS from San Antonio. Her first match proved to be her toughest as Runyan only gave up 5 games during her last three matches to win the Singles Championship title.
Cameron English had a great showing as well. She beat her first three opponents from Del Rio, Hondo and Uvalde before falling to a tough opponent from Laredo United South. English played hard and won the 2nd place medal in her division.
Malvin Flores and Laurel Spannagel beat their first opponent from Laredo Cigarroa 6-0, 6-0. However, their next opponent from Eagle Pass Winn proved to be too tough for them, as they lost 1-6 and 3-6. Eagle Pass Winn won the tournament. Then they beat a Hondo team and a team from Laredo Nixon to earn 5th place.
Kate Finto and Joran Erxleben made their first Varsity appearance. They lost their first match to Warren HS, but then won two matches, defeating Laredo Cigarroa and Uvalde. The last match was against Medina Valley which they lost. Tenth place is not too bad for their first varsity tournament action.
Jake Harrell played in Boys #1 Singles Division. He lost his first match to a very tough opponent from Warren HS. He then played and defeated opponents from Laredo Cigarroa, Del Rio and Knippa to capture the Boys Singles 1 Consolation title.
Caeden Alvarez played in the Boys #2 Singles Division. He won his first match against Uvalde, then lost his next match to Del Rio. Alvarez then beat his next two opponents to win 5th place.
Denton Zuercher and Corwin Flores teamed up to win Consolation in their bracket. They lost their first match to a tough team from Uvalde, then beat teams from Pearsall, Laredo Cigarroa, and Hondo to win Consolation medals.
Aidan Hildenbrand and Kaylee Saunders lost their first match to a talented team from Ingram. Then they defeated Pearsall, lost to Knippa and finished by defeating Uvalde to win 11th place.
Johnathon Gelinas and Victoria Nunez also had their first Varsity experience. They won their first two matches against Carrizo Springs and Laredo Cigarroa. Then they lost to Knippa and Laredo United South. They earned 4th place in their division. What a great way to start their high school tennis career.
This was Devine’s second tournament of the Spring Season. We did not get to finish our first tournament, which was held at East Central, due to rain. The kids competed and played hard. A lot of freshmen stepped it up and helped us win a 3rd Place Team Title. I’m very proud of them all and I’m looking forward to another successful tennis season.
This Thursday the JV tennis team will compete in Smithson Valley and then the Varsity will play a two day tournament Friday and Saturday. Next week the Varsity will play in the Uvalde Small but Mighty tournament February 14-15.
Courtesy Coach Melanie Sostarich