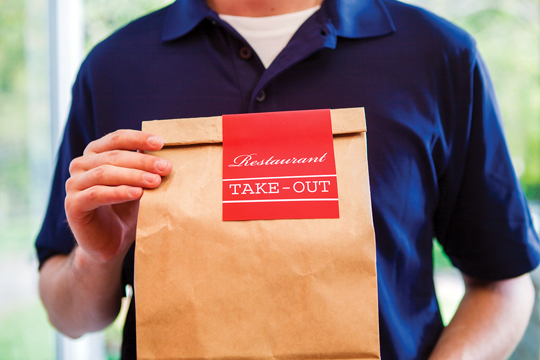 Most local restaurants in Devine and Medina County have kept indoor dining open, while some have expanded to include delivery service and or curbside service to help residents who wish to limit their exposure to others during the Corona Virus pandemic. In our calls to local businesses, we have been informed of the following actions being taken by local businesses. Though it was not possible for us to get a hold of everyone, we do appreciate the precautionary measures being taken. 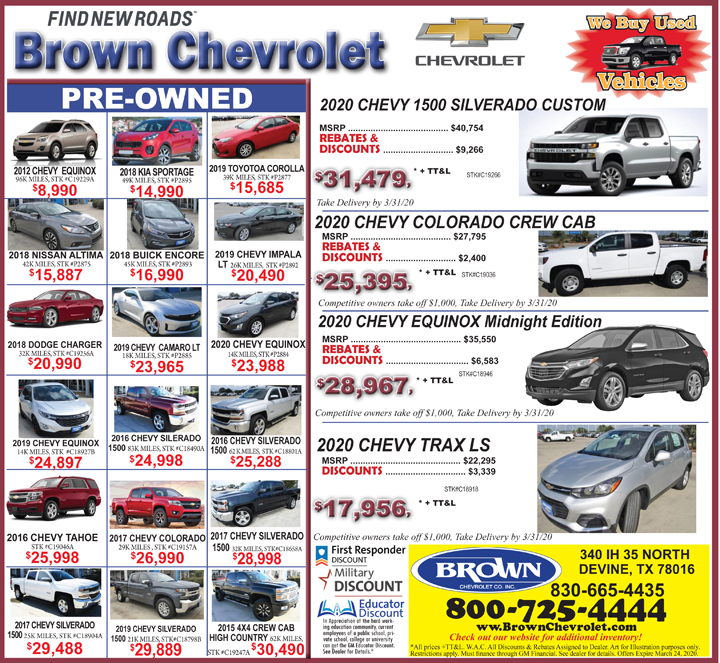 President Trump recommended no gatherings larger than 10, however it is up to the state and local government to make a decision about whether or not to mandate that, and so far they have not.
As one local resident, Kristen Friesenhahn states, “I will definitely not be going to restaurants for awhile because of the quick spread. I’m not so concerned about myself but for my family and who I could spread to. I just think it’s pretty simple….they are not asking for much…. just stay home unless it’s an emergency. I have had to run to the store to get a necessary item and went alone, washed hands when I left, and wiped down vehicle and phone. It’s not something I could have imagined I would ever have to do, but just trying to follow directions from the ones who are professionals at what they do, not the ones that are not.”
To those restaurants who choose to close indoor dining, she also states, “I would say thank you for taking the initiative to stop the spread….they may lose a little in return, but there is a bigger picture.”
Another resident Frieda May stated, “Even though we are a small town, and not as large as SA, we should all be aware of how serious the Corona Virus is. Yes we should use the drive thru of eating places if they have one, and if not, they should limit the number of customers and space them out. Banks and other places like that should close their lobbies and do what they can through the drive-thrus. And most of all I wish the stores would let Seniors have a time that they can go without being around the crowds.”
Big A’s Tacos is one of few local restaurants that are currently closed, and they are considering closing indoor dining in coming weeks.
The Contreras family from Big A’s Tacos stated, “We are actually on vacation this week! The virus just cancelled out trip to New Mexico.. so now we are just doing a staycation. We welcome the idea of closing indoor dining, and it’s something that is on the table for when we get back from vacation to prevent the spread of this virus. People could look back in 6 months and say “we overreacted” and that will mean it worked. Because the opposite means it spread. While we haven’t made a decision yet on indoor dining we are closely monitoring the situation and will act with great prudence.”
McDonald’s Castroville closes indoor dining
The only other indoor dining closure that we are aware of is McDonald’s in Castroville, which is serving on a to-go and drive-thru basis only.
Queta’s Offering Delivery temporarily
Queta’s Mexican Cusine in Devine is temporarily offering Home Delivery service to the Devine area in an effort to help keep people home.
“We are continuing to monitor the situation and guidelines, and are happy to help by delivering to area homes for customers who want to reduce exposure to others,” stated Kevin Sheeran on behalf of Queta’s Mexican Cuisine.
Triple C and RJ’s Cafe taking staff temps among other precautions
Triple C is remaining open, and said they are taking the following safety measures.
Rhonda Martinez at Triple C Steakhouse stated, “The following measures will be taken by Triple C Steakhouse until CDC requires different. To ensure the safety of our customers and employees the following will be in effect immediately. 1. All employees’ temperature will be taken at beginning of shift. 2. Gloves will be worn at all times by employees. 3. Menu’s, tables, door, chairs and all surfaces cleaned throughout the day. 4. We have placed a sign on our door and will send you picture. 5. No parties larger than 25.”
Triple C is also spacing out parties so there are not two parties sitting at tables next to eachother/

RJ’s also offering curbside pickup
RJ’s Cafe stated they will take those same safety measures outlined above by Triple C, including taking staff’s temperatures at the beginning of every shift.
“The safety of our employees and customers are our top priority,” said owner Robert Pequeno.
Hermann Son’s spacing out parties
Hermann Son’s Steakhouse has begun limiting the number of customers dining in at one time, by only seating every other table, so that there is a longer distance between tables as customer’s dine-in.