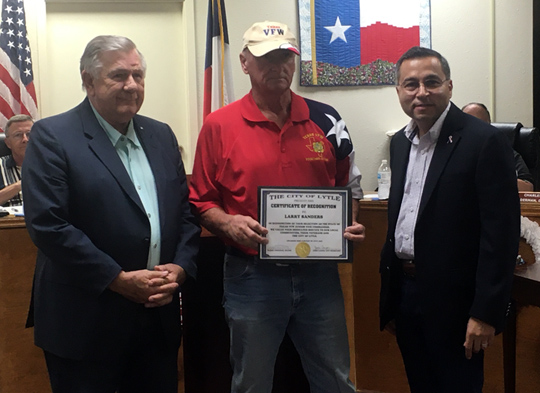 Last Monday, July 12th, Lytle’s VFW Commander Larry Sanders was given a surprise recognition at the City Council meeting for his selection as the State of Texas VFW Junior Vice Commander.
Sanders was scheduled to give a presentation on VFW at the meeting, so Mayor Gonzalez took this opportunity to honor the Vice Commander.
“Larry has done so much for our community and continues to set the example for other posts around the state to follow. We are very fortunate to have him at that level, not only as part of the state’s senior leadership, but also highlighting our community and its veterans.”
As Commander of the Lytle VFW post, Sanders is responsible for all that the post is able to do for local veterans and the community with charity events and holiday celebrations. To show the city of Lytle’s appreciation, the certificate of recognition he received read as follows.
“In recognition of your selection as the state of Texas Junior Vice Commander. We value your dedication to service to our local communities, their veterans and the city of Lytle.”
By Noah Davila
Staff Writer