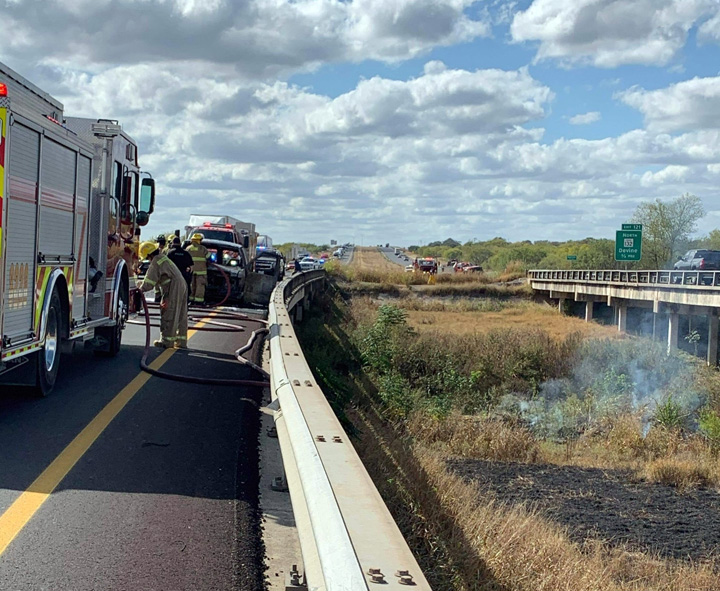 On Sunday, November 8th, emergency responders where dispatched to the scene of a 5-vehicle accident on IH-35 NB at mile marker 122. Upon arrival officers observed the 5 vehicles on the inside lane with one van beginning to smoke and catch fire. With the assistance of MCSO deputies, game warden, and DPS, IH-35 was shut down till the fire department could get to the scene.
“Traffic was stacked up so bad we could not get to the scene from behind, so they had to block off the interstate and we had to eventually drive the wrong way up I-35 to get to the scene, ” according to the fire department.
According to Devine PD Lieutenant Chris Andrews, “The officers’ investigation revealed that the accident was caused by a chain reaction which began with a reckless driver coming to a complete stop on the inside lane of traffic on I-35 N. The investigation is still ongoing due to the initial driver leaving the scene of accident. There were no major injuries, but one was transported by EMS for a minor neck injury.”
All traffic was redirected to exit 121, and downtown Devine was bumper to bumper with so many detouring through the city.
Upon Devine fires arrival, and with the assistance of Natalia FD, the vehicle fire was put out and grass fires that began erupting below the overpass were also extinguished.
Devine volunteer firefighters responding to the scene were: Michael Saldana, Mable Byrd, Shelly Watson, Ethan Yanta, Greg Atkinson, Byron Hruzek, Justine Hruzek, and Mike Walker. Natalia VFD also responded to assist with a big crew of volunteers, and our thanks go out to all of these wonderful volunteers who take time out of their busy lives to help in our times of crisis.